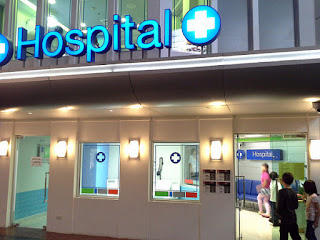 Due to personal circumstances I was an involuntary guest of one of Pattaya's hospitals for a few days. It is going much better now and I thought lets use this experience to inform you about hospitals in Pattaya.

First of all there all the small private clinics, in cities you find them everywhere and some of the are actually very good and inexpensive. Then there are the pharmacies, which also sometimes act like a mini clinic as to have a pharmacy you really need to have a degree in medicine.

After all the small clinic's and pharmacies in Pattaya there the hospitals. First of all there is the one and only Pattaya government hospital "Banglamung" located in Naklua (North Pattaya). It is in-expensive and most doctors are good some are even the same that also work in the private hospitals. But it is busy as it more or less free, so be prepared for long waiting ques.

Then there are the private hospitals. First of all "Pattaya Memorial Hospital" located at Pattaya Klang. It is not such a big hospital, but it is reasonable good facilitated with up-to-date machines and with good doctors. When living nearby this was my place to go for medical things.

And ...
Then there is "Pattaya International Clinic" at Soi 3 of beach-road. It is much bigger and much better facilitated hospital as "Pattaya Memorial Hospital" again also with good doctors.

And at top of the bill there is "Bangkok Hospital Pattaya" along Sukhumvit road near Pattaya Nua. It is Pattaya biggest and most modern hospital. It has almost all facilities that well equipped hospital in western Europe (or Bangkok) has. With good doctors and a lot of nurses. The big different with other hospitals is that it looks more like a 5 star hotel. The prices are also like that of a 5 star hotel. And it is my personal feeling that they sometimes do tests that are actually not necessarily but the testing equipment has to be paid for so why not use it? And as in any good hotel ... eh ... hospital they do speak your language whatever that may be Thai, English, Dutch, German, Russian, Spanish, Indian or any Arabic language.

Let also be noted that at least both at "Pattaya Memorial Hospital" as at "Bangkok Hospital Pattaya" non-Thai people pay a different price as Thai people do for a doctors visit. One could say that non-Thai pay more, one could also say that Thai are getting a discount. Of course at both hospitals they do not say so in public, but being a non-Thai and married with a Thai sooner or later you will see a difference in the hospitals bills.

When living on the outskirts of Pattaya you might also consider to go to one of the hospitals in Sri Racha (2 private hospital and 1 big & good government hospital) or at Satthahip with the navy hospital "Queen Sirikit".