Traveling over Sukhumvit road from Bangkok to Trat 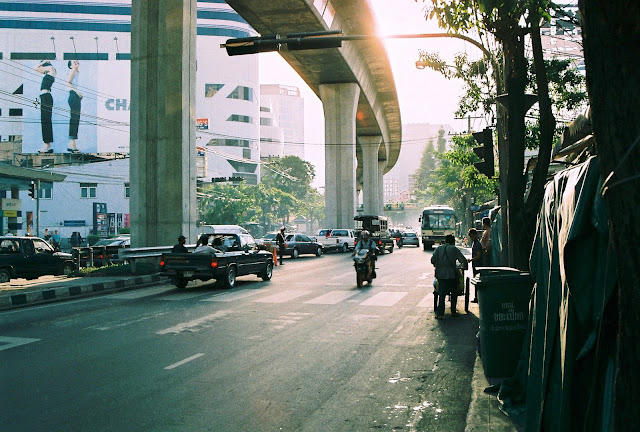 Lets start by stating that the only real highways are the toll-roads in Bangkok, all others are just major roads. And some of them have a long history and go from Bangkok all the way to the border of Thailand. Sukhumvit road (also called Route 3) is such a road. Sukhumvit road is one of Thailand's longest roads, beginning in Bangkok and ending at Trat. The beginning of nowadays Sukhumvit is world-infamous for its nightlife entertainment at Soi 4 (Soi Nana Tai) and Soi 23 (Soi Cowboy). Continuing further you are passing Phra Kanong and On Nut and it becomes more and more Thai city life with markets and klongs. After Bangkok the road goes sea-side to the industrial area of Smut Prakan, from where it continues the sea-side. You will be passing many factories, some fishing villages (like Klong Dan), fish-farms and sea-salt-farms.


You continue along the sea until Bang Pakong where Sukhumvit road merges together with Route 34 (Bang Na – Trat) where you will go over the “Mae Nam Pakong” and you enter Chonburi city where Sukhumvit road goes trough the middle of the city. Although Sukhumvit road does not follows the sea-side here, just after Chonburi city is a nice sea-side area with Ang Sila (famous for its stone mortars), Khao Samuk (famous for its monkeys and Chines temples) and then followed by Bang Sean beach (Bangkoks nearest beach resort).

After Bang Sean Sukhumvit roads enters another industrial area’s like Bo Win (many factories here), Sri Racha and Leam Chabang (deep sea-port and chemical industry). Sukhumvit road goes more or less trough Sri Racha, but it would make a nice side-trip to go to the sea-side here and visit Koh Loi (a small “island” connected to the mainland by a road & bridge) to visit the Chinese temple and see the turtles. From here you can also take the ferry to Ko Si Chang (20 min ferry ride) where the original “Summer Palace” for the Thai royal family was build. 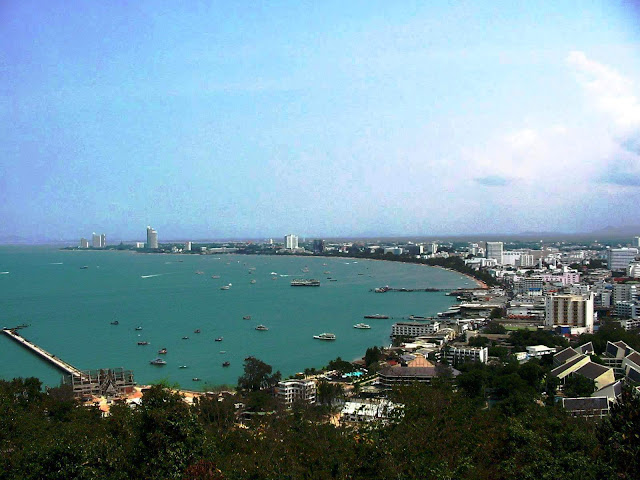 Following Sukhumvit you will be passing Pattaya (famous for its nightlife and busy beaches), Ban Amphur (famous for its sea-food restaurants), Bang Saray (beautiful beach and clean water) and the the Thai Navy controlled area of Satthahip (home of the Thai Navy). There just after the Navy port is a beautiful small beach, of course also Navy area but everyone can enjoy beach life there. Just after Satthahip you will be passing U-tapao Airport (nowadays called Pattaya International Airport) and Bang Chang. 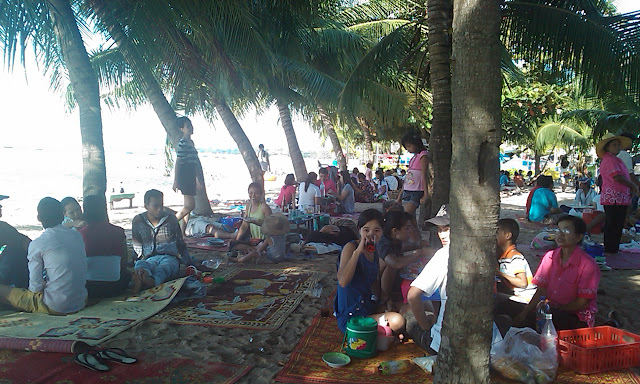 Continuing you will pass Thailand's second chemical industry at Maptaphut, followed by Rayong (Thai-famous for its beaches). Just before Maptaphut are some nice beaches like Phla with some nice beach resorts (although mostly a bit older Thai style). Just after Rayong is Thailand's longest beach “Hat Mea Rumphueng”, a beautiful beach with clean water and some beach resorts. While driving here over Sukhumvit you will pass a big fruit market at Thapong. This area is famous for its fruit like rambutan, jack-fruit, durian and many other fruit. Just after this is Ban Phe where the ferry to Koh Samet leaves (30min ferry ride).

After Ban Phe Sukhumvit road goes further away from the sea-side and you will be passing Kleang where at the “Pak Nam” river is an old Thai Navy ship “put” ashore and rebuild as museum. The road goes all the to Chantaburi where it by a T-intersection is connected to route 317 (going to Aranyaphratet).

This all stretch of Sukhumvit until Chantaburi is far from the sea, but the sea-side is here very beautiful with some beaches, mangrove’s and some rivers. Amazingly that there is almost no tourism here. Chantaburi itself is a small city with a lot of history. It is actually the only place in Thailand that has been colonized by the French. And they left some historical buildings like a prison building and the remains of an old fort.

At the T-intersection of Chantaburi you go right to follow Sukhumvit road in direction of Trat. Here Sukhumvit enters Trat city and officially end at the other side of town at the border of the city. Although the road continues but is now called route 3148, that finally ends at “Leam Ngop” where at the pier are leaving the ferries to the nearby islands like Koh Chang and Koh Mak. Just before Trat you can take a turn to the left and follow route 318 to the Cambodian border-town Hat Lek. Going all the way this road you are driving on Thailand's smallest part. On you left hand the mountains and the Cambodian border and on your right hand the Gulf of Siam (with beautiful beaches) 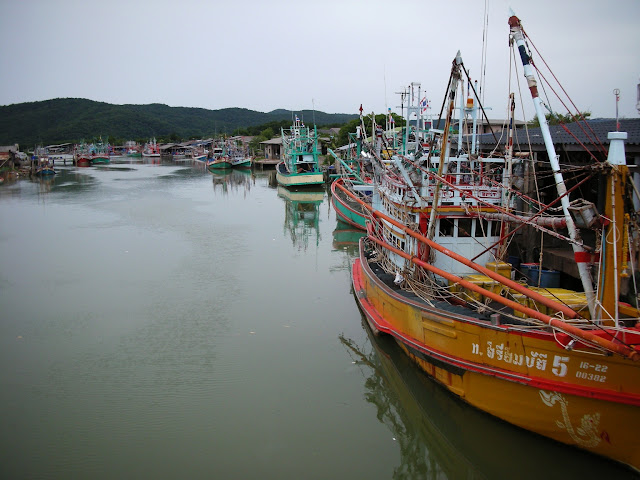 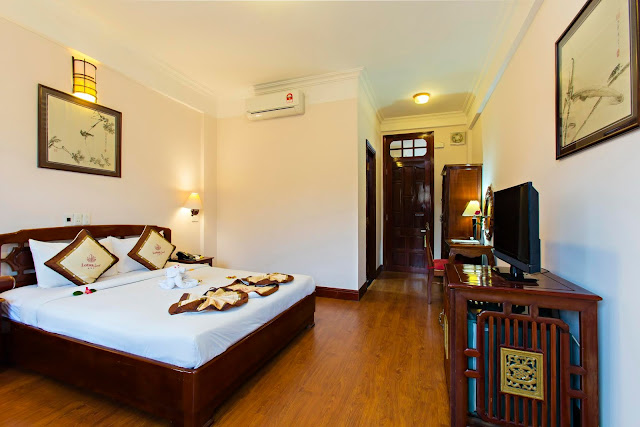 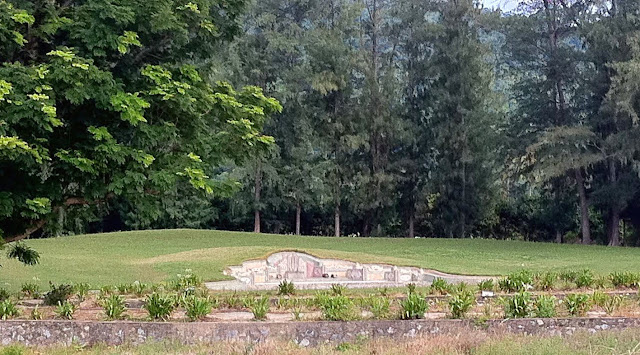 This post was originally posted in 2011, in the time I was still living nearby Pattaya and exploring nearby Chonburi by motorbike. I have always had an interest in history and graves & cemeteries make part of that history. Even in my home country I find it interesting to walk over old or abandoned cemeteries. When I was in Indonesia I did visit the cemeteries from the old Dutch people living there before. In Thailand there are not so much cemeteries because most Thai will be cremated at the temple and their ashes will be put in a small urn. But the Thai-Chinese like to make a place of remembrance and honour for their family. At some places you see the huge Chinese cemeteries, which prove that there must be huge Chinese community in Thailand and already for a long time. But not only like a big cemetery, also private graves just for one family or even 1 person. There are a few things that they have in common, they are all build in a kind of small hill and even on a real hill facing…
Keep reading