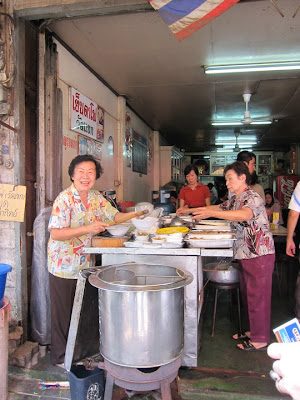 In Thailand food & eating is a part of the local culture so if you do not eat or at least try to eat Thai food in the Thai way then you are missing out a part of Thailand. Even if it is just a simple "Kao Pad" (fried rice) or "Kai Yang" (bbq chicken). Although I did not (yet) try it myself but I like the idea that 3 young Thai people had "Introducing Thai food to foreigners but in another way as normal and a little bit more". They organize walking tours in Bangkok to explorer the Thai (& others exotic) kitchen both on the street in restaurants. And while you are on tour not only exploring the food but also the rich history of culture and architecture of Bangkok.

I like the idea very much, next time when in Bangkok I will try to make a tour with them! As food is such an important part of Thai culture (the 3 young people could not do without it while studying in the USA) I think it is a great way to understand more of Thai culture as you read in books. And it also gives a chance to look to cultural Bangkok in a different way. See Bangkokfoodtours
Bangkok Central Thailand Links Travel-Tips
🌍 Bangkok, Thailand

Reposting from 2012. Along route 12 between Lomsak and Khao Kho is a beautiful temple build in Gaudi style. It is a meditation center thatwas when I visited it the first time partly still under construction. The temple itself is beautiful decorated with colourful mosaic stones. And it is located on a magnificent location on a small mountain with in the background the huge mountain range Phu Hin Rong Khla. For more information see Wat Phasornkaew . Following is a serie of photos. See also Re-visiting Wat Phasorn Kaew.