On the Motorbike to I-San Jurassic Park in Kalasin


Reposting from 2017. As it is finally great weather again for riding the bike I made trip in direction of Yang Talat, Kalasin and then via route 227 in direction "Lam Poa" reservoir at Sahatasakhan. Actually I followed the signs "Sirindhorn bridge" because I was curious what was so import about that bridge to mention it almost at Kalasin. Well the bridge goes over the "Lam Pao" reservoir and is a few km long. The reservoir was at a high level and some roads nearby the lake were flooded. Now this is a weird bridge to be build over an reservoir without and real road on the west-side and ending in village on the east-side without any signs how to get out of the village. On the west-side are some lake-side restaurants selling bbq chicken and fish.

But first I followed the signs "Siridhorn Museum" which is also called "I-San Jurassic Park" and which is actually really a museum. And although on the outside it did look a bit old and not taken care of, inside it was a modern and nice looking museum about Dino's and the history of Thailand in that regards. Be aware that the museum is a bit difficult to find as with Thai custom at the last moment there no signs anymore. Coming from the south (Kalasin) it is a small road on you right-hand side that goes to and temple. Just before the temple gate you turn right and follow the road that goes around the temple. For more motorbike trip reports in Thailand see MOTORBIKE TRIP REPORTS 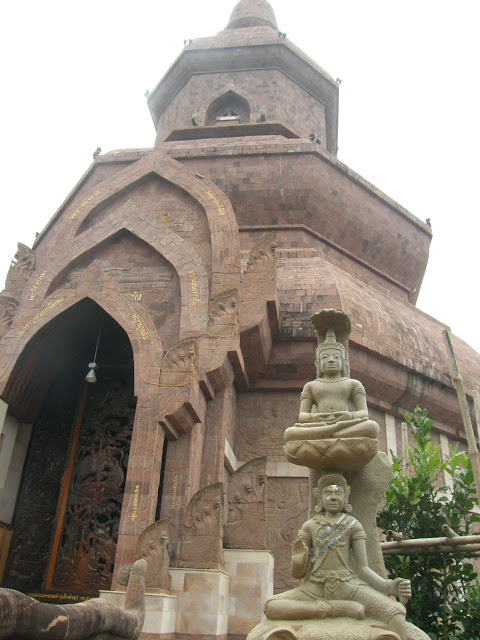 But the nice surprise was when I was just leaving Sahatsakhan I saw a huge pagoda in the middle of nowhere. So I went to have a look. It is "Phuttanimit Phra Saiyat" with a huge brown stone colored pagoda or stupa and a beautiful teak wooden building that houses a sitting Budha. The garden is build in an accent Khmer style and decorated with trees and sculptures like a "Reclining Budha" and the "Wheel of live".

The gate of the all complex was guarded by some young kids and at the parking there were some Thai tourists who were eager to have a chat with a westerner to practice their English. For the rest there was nobody. It is really amazing that this has been build here, it looks new and well taken care of. And of beautiful design. After this a continued in direction of route 2041 and route 213 again and followed route 213 in direction of Sakhon Nakhon. It is a beautiful twisty road up the mountain of Phu Phan. As I had to be back that day I made a u-turn and did ride back to Kalasin and then to Khon Kaen. But if you continue the road to Sakhon Nakhon you will pass the famous "Snake Curve" .... about 8 km of the most twisty road I have ever seen in Thailand! 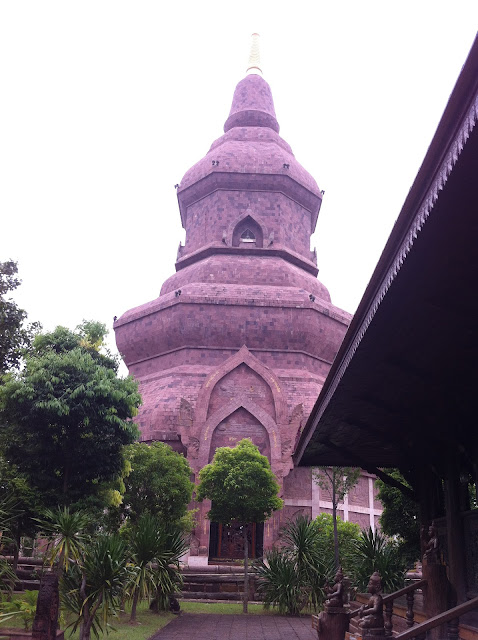 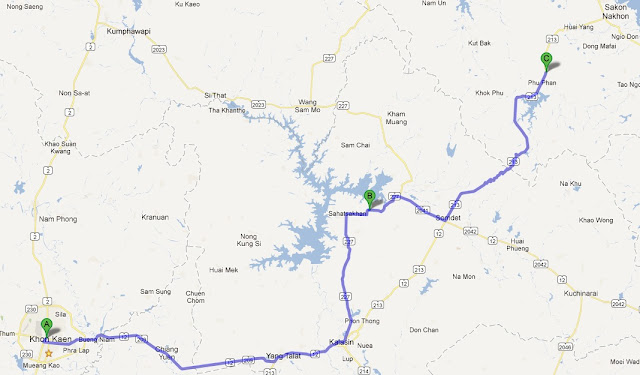