On the motorbike to Loei and Chiang Khan 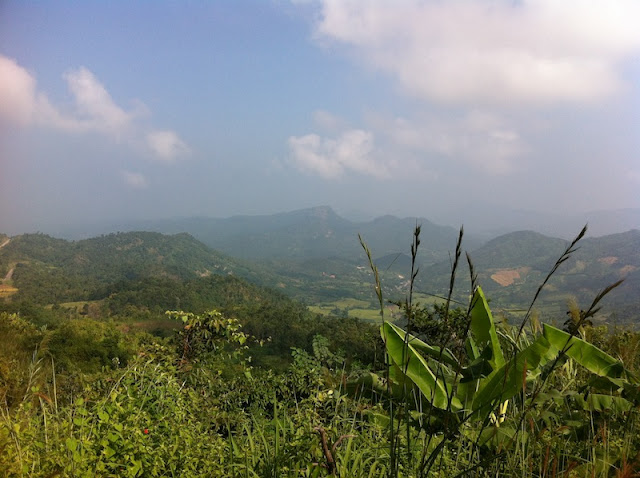 Day 2 : Loei to Chiang Khan via Phu Ruea and Thali

As going from Loei to Chiang Khan would only be a less as 1 hour ride I made a kind of looping on the east of Loei city. So I did first ride route 203 in direction of Dan Sai but later followed other routes bringing me first to a beautiful lake just 15 km west of Loei city and later to Thali where you can cross the border to Laos. Luang Prabang only 363 km! The border route 2195 was in very bad shape so I made a left turn to follow route 2294 in direction of Phu Ruea (National park) to enter route 203 again to ride to the entrance road of Phu Ruea National Park (left hand just before the market). After paying entrance fee I did ride all the way up to the top and although there are a few viewpoints

The best view is when riding back down the same road again. Wow what a beautiful view and specially in this time of the year with the fog & clouds. And also a very cool (almost cold) breeze! A place to return! After that I took the fast & easy way to Chiang Khan via route 203 back to Loei and route 201 to Chiang Khan. Arriving there in the weekend while Bangkok is flooded was not a good idea, almost all guesthouses & hotels were full! Wow what has Chiang Khan changed and become a kind Pai. See Thali border crossing and Phu Ruea National Park

Of course I could have taken the road all the way along the mighty Mekong River (route 211) but that would be too simple so I did meet up with 2 other bikers at the intersection of route 201 and route 2108 in direction of Pak Chom. Wow again what a beautiful route in the morning fog thru the mountains! After following route 211 along the Mekong River for while I took another right turn back into the mountains and following route 2348 in direction of Na Ngio. And again .... wow so nice riding. Most of the roads are good and the view is great! And riding in the high mountains gives also a nice cool breeze. Later I took a left turn to follow route 2376 in direction of Sang Khan to have lunch along the Mekong River. From here I took route 211 along the Mekong River to Nong Khai where the Thai-Lao friendship bridge to Vientiane is. I had a short stop at the boulevard of Nong Khai overlooking the bridge and then I made a quick ride to Udon Thani as after more as 1.000 km in the past 3 days it was time for a 12.000 km service-check of my motorbike.