Having lunch at Home Restaurant in Savanakhet, Laos 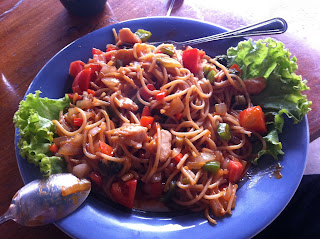 April 2012 When I arrived at Savanakhet it was raining and I had me dropped of at the old immigration & ferry office where are also all the TukTuks. I was looking for "Lao Paris Restaurant" but could not see it so I just walked into the first place that I saw. And that was a good choice! It is called "Home" and indeed it feels like home with a cozy atmosphere and friendly staff that speaks a bit of English and Thai. I ordered a spaghetti with chicken and it was a huge dish, prepared with a little bit Asian taste. Delicious it was!


Update March 2015 When I was in Savanakhet in 2014 the restaurant did look like it was closed for always. But last week I saw that a new restaurant has been opened at the same place.

In Myanmar they say "every hill should have a pagoda", but here in North Thailand they are also good at it. This is the Wat Phra That Chom Cheang on hill in Pua, the temple consists of a golden pagoda. The pagoda itself is not so impressive but the view over the valley of Pua is, especially at late afternoon. The Wat Phra That Chom Chaeng can be reached via a small road behind the village Don Keaow. Halfway there is a small parking where the stairs guarded by naga's is leading to the pagoda. Luckily the road continues to the pagoda itself. Be aware that if you like to sit here watching sunset that the road has no lights and it goes thru a small forrest. From the sala next to the stairs you will a stunning view over the valley of Pua. I thought that from here you would have a beautiful sunset view but unfortunately most of the sunset is just behind trees. Of course this will improve a bit during the cool season. Following are a few more photos I took. For more information
Read more