While living in Thailand I sometimes think about my life in my home country and also about my lovely MG Midget MK3. It all began with failing to get my driver license for my motorbike (although I did ride a Honda CB400four for 2 years). On a summer day full of sunshine I thought "What the heck I am going to drive a old-timer cabriolet". And I did! I started to look around and as I always did like small cars I did totally fall in love with the orange MG Midget MK3 from 1973 that was for sale at a small "car shop" in Den Haag. After some talking about the price and about things that had to be done on the car the deal was made and the next week I drove home in my own little Midget. And so I opened a box of Pandora unknown to me before. I had always liked to work on cars and as I started to learn that I could buy almost all parts for this car a Do-It-Yourself restoration project of the Midget began.


First I did trow out the ugly black interior and replaced it by what I think was original for the car "Autumn brown". That was a winter project when the all interior ended up in our living room and I refurnished the all car myself. Unfortunately I did also trow out the original radio. The dashboard was bit damaged by the sun of California and a cover was placed over the dashboard.


While shopping around for spare-part I did find another old-timer freak with a car shop in Zwijndrecht. When I told him of my car he said "I bought that car in California last year for my wife, but it was to small for her so I sold it again". And he showed my a photo of the car in California dumped next to swimming pool in the backyard of someones home. Unfortunately I do not have that photo. Yes there was still Californian sand in the back of the car. Meanwhile I started to use the car almost full-time even in the winter when it was snowing! Most old-timer cars do not come out after the first rain after the summer, not mine! I remember a beautiful winter with snow and sunshine when we went to a old-timer meeting and we were the only one coming in our old-timer.


To be able to use it full-time I had the engine overhauled, build in a Toyota gear-box, bought a hard-top in Veenendaal and did put Kn&N filters on the twin carburetors. While on process I of course also removed the all emission-control unit. After 5 years of hard working, fun and problems I was so stupid to sell because my wife and me started the journey of our life. I sold it to a Indonesian guy in Capelle a/d IJssel and I heard he made a crash with it. Now living here in Thailand I am missing my good old Midget. Maybe time for new adventure? Latest update is that the car is not registered anymore, that means it is totalled crashed or the car has been exported.

Family life at the riverside market of Voeune Sai, Cambodia 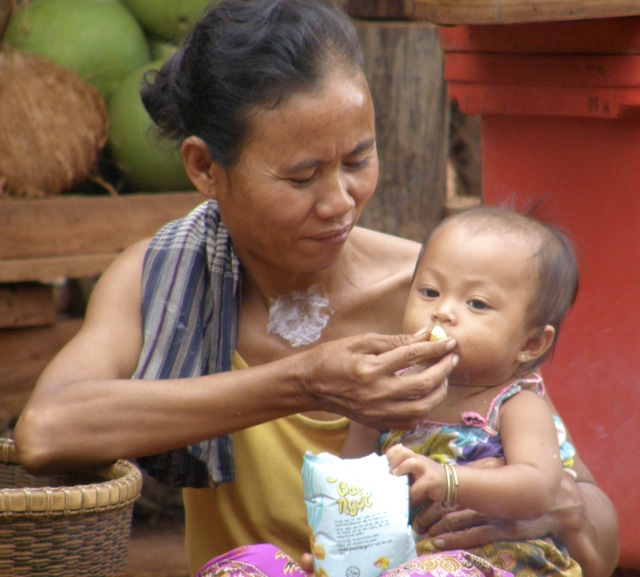 Reposting from a trip in Cambodia in 2013, I would love to be traveling again upcountry in Cambodia. I was staying in Ratanakhiri (Ban Lung) and rented a scooter to explore the area and took the road (route 78A) north of Ban Lung to Voeune Sai along the Tongle San River. Voeune Sai is a simple village with dusty dirt roads and of course a market and a ferry crossing the Tongle San River. And while sitting near the riverside market in I saw this mother and her baby a little but further away. I took this snapshot with with full zoom of the telelens with my Olympus SP550 camera. A bit lucky shot without tripod.