Tomorrow (22 July 2013) is “Asana Bucha” day, full moon at the 8th Thai lunar month and celebrates the Dhammacak kappa Vatta Sutta (the setting of the movement of the wheel of Dharma). The day after (23 July 2013) is “Wan Khao Phansa” day, the beginning of Vassa or Buddhist Lent (a period of 3 months where Buddhist monks will not “leave” the temple).  I am not Buddhist but my wife is and I respect her way of life. So tomorrow very early in the morning we will be giving gifts to monks (making merit) in an upcountry temple about 30 km from our home town Khon Kaen. In all supermarkets in Thailand are “monk aisle’s”, an aisle where all kind of things for monks are sold. Traditionally there are sold candles as “Wan Khao Phansa” marks also the festival of light. So today we went to the local supermarket where they sell “buckets” with a set of things a monk might need. My wife inspected the bucket and decided that it is actually overpriced. So we bought our own bucket and filled it up with things we thought a monk might need. And all in a bit better quality. And of course we bought the modern version of a candle, aTL-light! 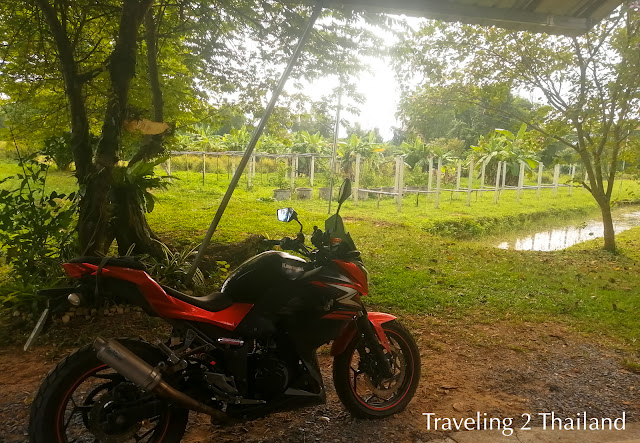 In November 2020 I did made a motorbike trip in North Thailand and did stay at Rai Boonsom Farmstay for 1 night, located in a 18 rai rural garden on the outskirts of Phrao town. The owner is a super friendly lady who serves fruit & juice. Rai Boonsom Farmstay has a main building with 2 rooms and huge balcony. And a garden bungalow with 2 rooms (1 with air-con the other fan-only). I did stay in the wooden garden bungalow, the room on the ground floor (with air-con). The room has private bathroom with shower but is not accessible from the bedroom. You will have to walk outside to get in your bathroom. In front of the room is a small verandah to sit & relax. I loved this place, relax sitting outside enjoying the view over the garden. Highly recommended! You can book Rai Boonsom Farmstay via Agoda or Booking but of course best to book directly. For more information see  Facebook page of Rai Boonsom Farmstay . For location have a look at Google Maps .
Read more