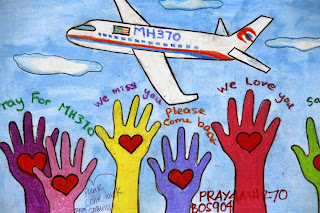 On Saturday 8 March 2014 flight MH370 (Malaysian Airlines) from Kuala Lumpur (Malaysia) to Beijing (China) was "lost in thin air". Up to today of 1 November 2014 not a single piece of the airplane and it's 227 passengers and 12 crew members have been found. The most proclaimed theory is that the airplane flew in direction of Australia and crashed in the Southern Indian Ocean. A terrible "accident" for all the family members & beloved one's who are left behind with only one question "What really happened?".

I also believe there are many questions left ... questions that for some reason are not asked by the main-stream media. In this time of fear for terrorism it surprises me that nobody seems to really worry about the fact that it seems possible to "steal" a Boeing 777 with 239 people on board. If this could be done once, it can be done twice.

It seems to me (and it surprises me) that both pilots of the flight have been of the hook so quick and easy. It seems to me that "the media" and Malaysian Airlines wants us to believe that the proclaimed theory of crashing in the Indian Ocean is the only scenario that could have happened leaving no room for investigation to other scenario's. Will we every know what happened?