Many travellers skip North-East Thailand, but before you join them .... pssst .... don't tell others but .... know that the area in the surrounds has some spectacularly beautiful countryside and unexpected natural wonders like Khao Yai National Park and the Dangrek Mountain range with stunning waterfalls, truly breathtaking and completely off the radar. And check out the majestic ancient temples of the Greater Khmer Empire like "Prasat Phi Mai" and "Prasat Phanom Rung".

With 18 provinces and in the south bordering to Cambodia, while in the North and East bordering Laos with the mighty Mekong River for 850-km as border between Thailand and Laos, North-East Thailand is also called "Isarn" or "Isaan" and his home to a multi cultural population from Lao, Thai and Khmer living along the Ancient Khmer Highway. With languages spoken as Lao (or Isarn), Khmer and Suay.

The Isaan is traditionally famous as being the rice-barn of Thailand and being the poor part of Thailand. That is partly still true but there are a lot of changes in the past 10 years. So what is the North-East of Thailand? 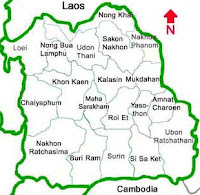 There are so many interesting places to visit, one could spend a full month travelling in North-East Thailand. But lets give you a short overview.

"Khao Yai National Park" near Saraburi / Pak Chong, at a altitude of 400 - 1000m above sea-level, borders between North-East and Central Thailand. It is Thailand's third biggest and first National Park. With an abundant range of plants, animals (birds, elephants, bears and even some tigers), waterfalls (Heo Narok, Heo Suwat, Namtok Sarika). Other stunning National Parks are in the remote province Loei, like Phu Luang, Phu Ruea and Phu Hin Rong Khla.

"Prasat Phanom Rung", located near Buriram, is an ancient Khmer temple set on the rim of an extinct volcano at 400m high and dating back to 10th century. Other ancient Khmer temples are "Prasat Phi Mai", "Prasat Viharn" (although technically in Cambodia) and "Si Thep Historical Park".

Traveling along the mighty (but not so blue) Mekong River shows you the upcountry multi cultural way of life in places like Bueng Kan, That Phanom and Mukdahan.

Main cities to visit are Nakhon Ratchasima, Buriram, Surin and Ubon Ratchathani in the southern part. In the upper part the main cities are Khon Kaen, Udon Thani, Nong Khai and Mukdahan. My favourite province is Loei.

The North-East of Thailand is also a perfect gate-way to Laos, Cambodia and even Vietnam with more as 10 International border-crossings between Thailand and Laos / Cambodia.

So when travelling to Thailand consider to go off the beaten track, visit North-East Thailand and admire the history, culture and National Parks.

Bangks, ATM's and Hotels or Guesthouses are found in all cities and even upcountry.

The North-East of Thailand has about the same seasons as the rest of Thailand : Cool & Dry from November to January, Hot & Dry from February to June and Raining from July to October.
Isaan Travel-Tips
🌍 Thailand