A cartoon a day keeps the doctor away in Bangkok 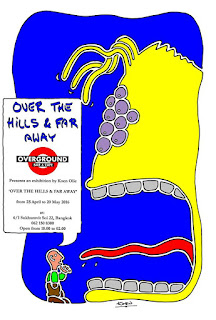 Koen Olie, a famous Dutch cartoonist living in Bangkok, will have a small exposition of his colourful cartoons at "OVERGROUND BAR & CAFE" on Soi 22 of Sukhumvit road from 28 April 2016 until 20 May 2016. The "Overground Bar" is open from 18:00 until 02:00. So if you are in the neighbourhood, drop in have a drink and a look his wonderful and colourful cartoons. I love his daily cartoons ... sometime a bit too colourful for me but always funny. And sometimes very recognisable about living in Thailand.

I'm originally from Holland, but have been living and working in Bangkok since the late 1980s. During the 1990s my illustrations and cartoons appeared in local Thai magazines and newspapers. I also illustrated books for local publishers and presented my work in several large exhibitions. At the end of the 1990s my production slowed down and I concentrated on other business ventures, but never gave up art altogether. I started drawing again in early 2012, but this time just for fun, usually a few drawings per week. Since then I made several post cards and T-shirt designs. For more about Koen the artist and his colourful cartoons have a look at Facebook page ART58 Koen or ART58 Koen
Art Bangkok Central Thailand Traveling
🌍 Khlong Tan, Khlong Toei, Bangkok 10110, Thailand

A few days ago the news about his death reached us, we did became befriended when he was working at our house last year. He became only 63 years and left behind a wife, daughter and 3 brothers. A hard working man from a small village in Pua district. Always friendly, always smiling and always willing to help. And never complaining about his own problems, maybe he should have .... cancer is high on the list of cause of death in Thailand. Especially upcountry where it is not easy to get good healthcare. So yesterday evening we went to the third & last evening wake and that was a bit different as normal. As normally there is a group of monks chanting for a good return in the circle of life & death. But this time there was only 1 monk. A famous one in Nan province, from a Buddhist meditation center. He started to talk about the life of our friend and he tried to make it a nice story to listen to, with a joke & smile. Then he talked about the problems & joy in all our lives…
Read more

Reposting from 2016. Traveling in South East Asia (Thailand included) you might have seen your share of temples. Some people get "temple tired". And although I must have seen hundreds of temples by now I am not boring of temples. Not for religious reasons but for the beautiful art of building temples and Buddha images. And many times temples are at very nice locations in the mountains. As with this temple also. I have been passing this temple many times and thought "I have to stop here next time". And until yesterday I never did. In front of the temple is a huge reclining Buddha, not fully finished yet. You walk up to the stairs that are overgrown by flowers and think to arrive at a abandoned temple. But nothing like that as there is actually also a small road going up and behind (higher) are at least 3 pagoda's in beautiful design with 100's of black Buddha's. But more about that next week when I am back home. For more photos see also Buddha's Feet…
Read more