Motorbike trip 2016. In the old days the area of Nan was partly spread over what is now Laos. So there are a few old border crossing points. Via Google Maps I did find one and decided to try to go there. So I left in the early morning and did ride via route 101 to Tha Wang Pha and Pua. My first stop was at the "Wat Phuket" in Pua. Jus for the fantastic view and the good toilets. From here I took route 1256 to Bo Klua. Well I made some side-trips to small villages but this are really minor roads and most times end in dirt-tracks. Along route 1256 are some nice views-points and you will go up to almost 1700m high. A wonderful route, but be aware that the road is not always in very good condition. Due to the heavy rainfall there have been some landslides and some road parts are damaged. In Bo Klua I did visit the ancient salt pits and had a drink at the small coffee shop. There are also a few restaurants. For more information about Nan province have a look at Destination Travel Guide Nan.


From Pua I took route 1081 north for about 30km. Then I took a side route to a small village and in direction of Ban Piang So. Unfortunatley after about 10km the road became in a very poor condition and with some steep parts up & down. Do I decided that this was not a good idea being alone and on my road-bike with hard-compund tires. So I made a u-turn and did ride the same route back home.

Nevertheless it was a great day-trip. Although not much in distance it took me about 8 hours (incl. a few side-trips). Be aware that if you do not know the area and are planning with Google Maps that not all roads on Google Maps are really roads (now) or they could be in very bad condition now. Also be aware that Google Maps sometimes lets you ride very weird routes. If you want to see the route I did ride click on "Click here for more". 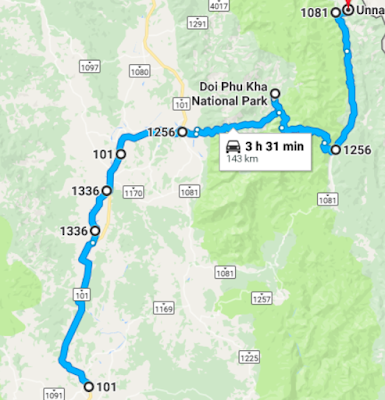 From I took route 101 in direction of Pua. After about 27km there starts road-construction on route 101. After riding this road-construction part for about 3km you will be crossing the Nan River. About 100m after the bridge is a road to the leftm route 1336 to Tha Wang Pha. This is a nice local route (good road) and a great way to bypass the next 10km of road construction.

At Tha Wang Pha I did enter route 101 again in direction of Pua. You ride thru Pua and at the end you made a u-turn (at the Tesco/Lotus). Then about 100m after the Tesco/Lotus is a small road to your left. There are signs for Doi Phu Kha and Bo Klua, bit not very well in sights. This is a 500m long short-cut to route 1256. From here on there will always be good signs for Bo Klua.

Just follow route 1256 all the way to Bo Klua. Along the route are some local jungle markets, view points and you are passing Doi Phu Kha National Park. In Bo Klua are some small restaurants, Coffee shops, small resorts. And of course the famous ancient salt pits (just follow the signs). Route 1256 end in a T-section with route 1081. I did go north (take a left) in direction of Khun Nan National Park. After about 6km there is a small road to the right that goes to a wonderful waterfall. About 3km ride further and then you have to park your motorbike and walk.

I continued route 1081 and about 20km after Bo Klua you are passing the origin of the Nan River. I did continue on route 1081 until a village Ban Khun Nam Nan. Here I took a right in direction of Ban Piang So on a local route. It should have been another 25km but after about 10km the road became so bad that I stopped and made a u-turn. If you would like to have more information about riding in Nan province please contact me.