On the motorbike from Nan to Chiang Mai via Chiang Rai

Motorbike trip 2016. I am just back from a wonderful motorbike trip making a loop in Northern Thailand. Starting and ending in Nan via Phu Chi Fa, Chiang Rai, Fang, Tha Ton, Chiang Mai, Lampang and Phrae. Making some small side-trips along the way it was about 950 km total. And it did not all go according plan as the fluid of my rear brake did overheat and I had suddenly no rear brake anymore. It is a stunning route to ride, passing mountains, valleys, rivers and small villages. Highly recommended route in North Thailand. And the cool season is the best time to do. Following is a more detailed route description and some photos I took along the way. 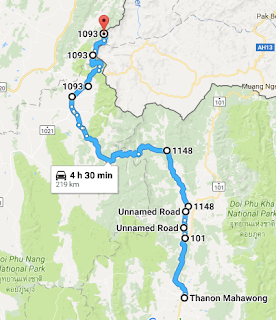 First via route 101 from Nan in direction of Tha Wang Pha. About 15km before TWP I took a left to a local road to bypass road construction at route 101(should be finished at 18 January 2017). This local road ends up at route 1148 to Chiang Rai.

Passing Song Kwae where I had breakfast and Phu Lankha from where you have stunning view over the mountains and valleys.

I kept on following route 1148 until a bit after Chiang Kham, where I took a right to route 1093 to Phu Chi Fa. First passing Phu Sang Waterfall and later hitting the mountains bordering Laos. At Phu Chi Fa I had early lunch and had done 219km.

The first day did not go as planned. After climbing the Big Dipper you have to go down again. Also steep down. And a long way down. That did all go perfect. But at the next intersection I wanted to brake and realised that my rear brake was not working at all anymore. I did ride slow for about 10km and the brake did cool down. So the rear brake did work again, but not they way it should be breaking. So the last 50km to Chiang Rai was a bit slow and uncomfortable. I did find the Kawasaki dealer in Chiang Rai. But they were very busy .... but they made time for replacing the brake pads and brake fluid. That did feel much better. As it was late I decided to stay in Chiang Rai city.

Road update : Only just before Phu Chi Fa was road construction going on. And near Phu Lankha are some very much put-holed parts. For the rest is the all road good. 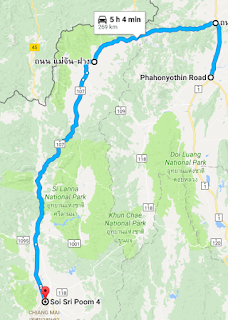 Again leaving early at about 6:00am and heading north on route 1 for about 25km. Then took a left to route 1089 to Fang and Tha Ton. (You could also go a bit more north and take route 1130 via Doi Mae Salong. This route ends up at the 1089). At Fang the road changes into route 107 and continues to Chiang Mai.

At Tha Ton are some temples and pagoda's on a mountain (7 levels), you can ride up with a good road. Great views from the top.

A wonderful route, most parts beautiful in the mountains. Some parts a bit boring & busy in a valley (like near Fang). Along the route are places to eat and gasoline stations.

Route update : This all route is in good condition 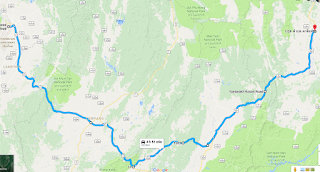 Another early morning to take route 11 to Lampang and from Lampang continue route 11 in direction of Den Chai. But halverway I took a left to route 1023 to Long and Phrae. From Phrae hitting route 101 again to Nan.

Along route 1023 is a very nice place for breakfast, lunch or dinner. And they also have a good Coffee Shop.

Halver way Rong Kwang and Wiang Sai is along route 101 a nice small waterfall "Namtok Huai Rong", just 4km from the main road. A bit small waterfall but located in a nice area with many big trees. A nice place to relax.

Route update : This all route is in good condition. Except that on route 11 between Lampang and Den Chai is some road construction. And on route 101 before Wiang Sa. 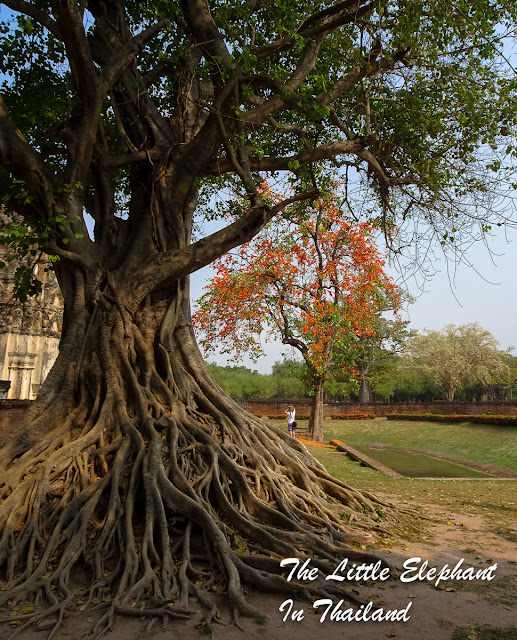