Travel Tips : Names of places and provinces in Thailand 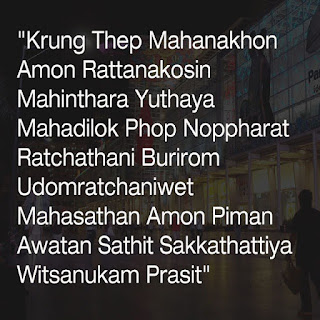 It all starts with Siam the old name of what since 1932 is called Thailand. But let's take the capital city of Thailand, internationally called Bangkok. But by most Thai called Krungthep, while the official name is much much much bigger (see photo). So Thai many time use a short version of the name. Like Ubon Ratchathani becomes Ubon. And Udon Thani becomes Udon.

And Nakhon Ratchasima is also called Khorat (the old name), what is also written as Korat.

As you see in the name of a city is many times "Samut", "Nakhon", "Phanom" or "Buri". That itself may make it a bit confusing (at least for me) for place names like Nakhon Pathom and Nakhon Phanom. And of course there is also That Phanom.

And to help you around Bangkok are Samut Prakan, Samut Songkram and Samut Sakhon.

Then there are names that just look the same, like Ranong and Rayong. To add to the confusing in both provinces is a island with the same name...... Koh Chang.

And in Nong Khai province is a place called Si Chiang Mai, while Chiang Mai is the most famous province of North Thailand (but about 700 km away).

Speaking about the Mekong River .... it is also called Mae Nam Khong or easier just Kong.

And as there is no official translation from Thai to English .... islands are written as Koh or Ko (Koh Samui or Ko Tao).

(Actually there some kind of official "translation" ... see General_System_of_Transcription)