The ethnic minorities of Hmong people come originally from China and settled in North Thailand in areas of Chiang Mai, Chiang Rai and Nan province. They celebrate New Year on a bit different date as Thai New Year or Western New Year (yes many new years in Thailand!). Most times it will take 3 or 4 days but some villages celebrate it 10 days. Because of this it also looks like the New Year celebrations are a bit on different days, depending on village or area. The Hmong call it Nor Pae Jow and it is celebrated after their harvesting, end December or begin January. Depending on the village the celebrations can take up-to 10 days! A important part of the celebrations is to show & respect the cultural traditions of the Hmong authentic costumes and games to be played. The show of traditional costumes is a photographers paradis with a rainbow of colours.
This year (2019) they celebrate New Year from 9 to 12 January with local Hmong customs like the throwing of a small ball between girls and boys. We were in Pha Klang the first day and unfortunately it was a dark day with even a little bit rain, so it was not as spectacular as it would normally be. The ladies are wearing silver made jewellery what can be worth a year salary nowadays. In the small village in the mountains you will still see older people wearing the traditional cloths, that are all hand made by themselves.

Hmong New Year is celebrated in December / January, but exact days change per year as it is a moon-calendar festival. It is celebrated at any Hmong villages in the mountains, but one of the main places is at Pha Klang, a village about 5 km from Pua in Nan province. 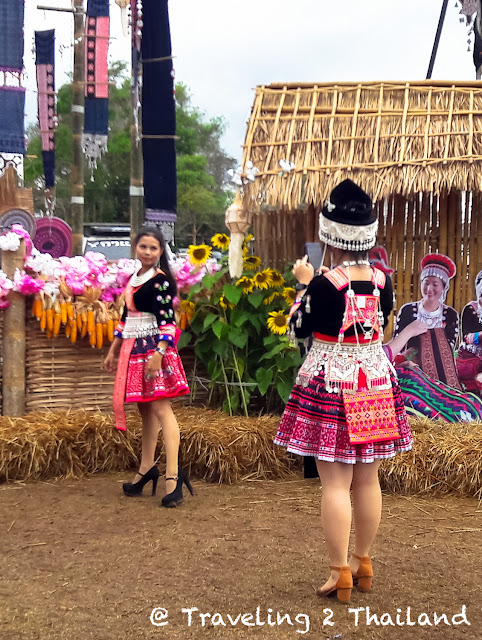 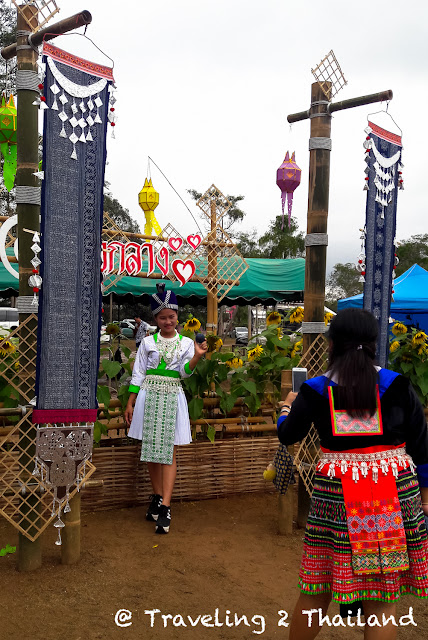 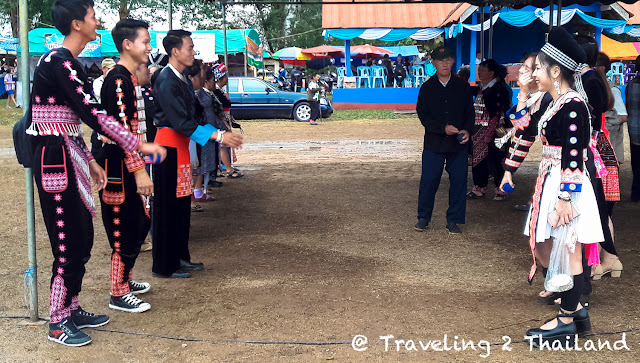 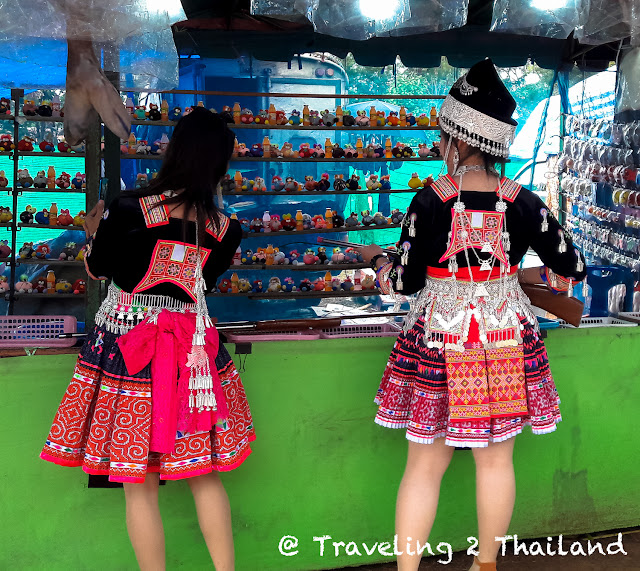 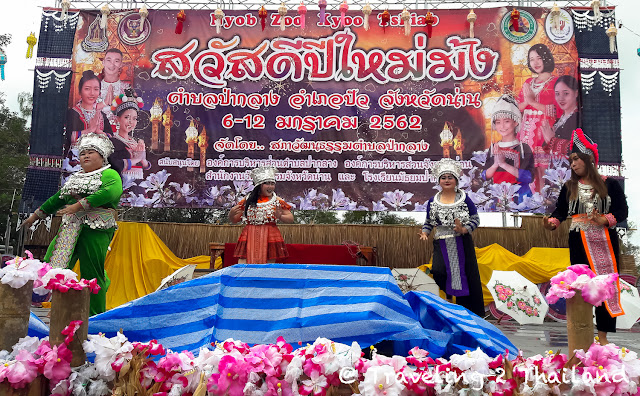 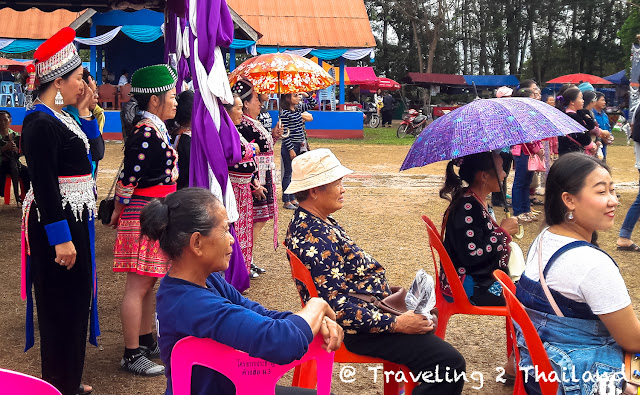 How about the air quality in July?

The raining season has started, most of the burning has stopped for the moment and had some rain this morning but at the moment a blue sky with some clouds and a cool breeze. Lovely weather and at the moment the US AQI is 17 here with a PM2.5 of 4.1 µg/m3. That is a huge different with 27 March 2020 when the US AQI was 108 here with a PM2.5 of 38.2 µg/m3. Hopefully we will enjoy this lovely clean air until at least end of February 2021. Then the burning will start again. And again suddenly everybody is shocked and everybody is screaming that something will be done. Keep on dreaming ... the cheap agriculture products supply the elite with a good profit. So the farmers in will keep on producing short-term agriculture like corn and cassava. And again many people living will directly and indirectly die of air pollution. The forest in the mountains will be cut down and nobody sees it until in the raining season there are mud-slides. And also then suddenly everybody is shocked and everybod…
Read more

On the motorbike making the Bo Klua Loop in Nan province

Reposting from 2018. Nan province is motorbike riding heaven, so as motorbike rider living in Nan province I have plenty of choice for stunning routes to ride. The "Bo Klua Loop" is a famous loop to do from Nan town, but I do it from Pua. From where I am living it is only 48 km via route 1256 to Bo Klua, passing Doi Phu Kha National Park and Viewpoint 1715. From Bo Klua I first took the scenic route along the Mea Mang River. This is small road between the rice fields in the valley of Bo Klua and connects to route 1081. I then followed route 1018 in direction of Pua, but about 15 km before Pua I took a slightly different route back home. A few km route 1170 and then short-cut that goes to Pa Klang. Pa Klang is a group of villages created by the government as resettlement for Hmong & Tai Lue from the mountains of Doi Phu Kha. A total of 120 km, perfect for an early morning ride. Following is a serie of photos I made long route 1256 and route 1081.

This is about staying legally in Thailand. I love living in Thailand, it feels like my home. But although I am now living here more as 18 years, I still not have (and probably never will have) a permanent residence status or Thai passport. So that means that every year I will have to apply for a new Visa or a new Extension of Stay (EOS). Last year I did get a 1 Year Multi-Entry Non-Immigrant "O" based on marriage because I had overlooked a small thing when applying for an Extension of Stay. As this would end within 6 weeks from now I started the process for Applying for an Extension of Stay (EOS) based on marriage.
What is an "Extension of Stay"? Simply .... exactly what it says. And Extension of Stay permits you to stay longer in Thailand. Like I entered Thailand with a 1 Year Non-Immigrant "O" Visa, that permitted me to stay in Thailand until a certain date. As long as this visa is valid I can enter Thailand and get a 90 days entry-stamp. So 1 day befor…
Read more

The corona effects on the tourism sector in Thailand 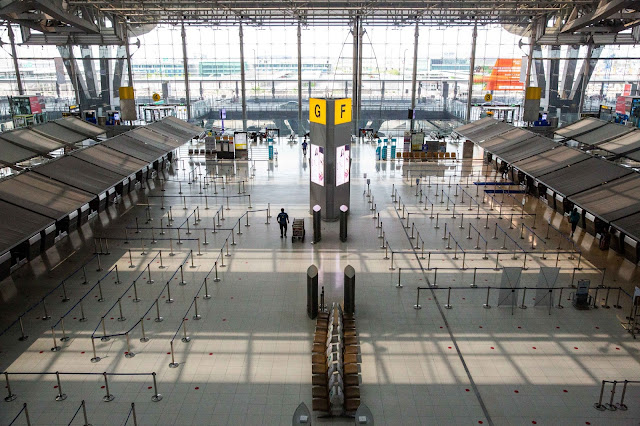 Warning : Following writing is based on my personal experience while living in Thailand and what I personal think about it. Due to the Corona Crisis worldwide International Traveling is at an almost standstill. Since a few months all borders of Thailand are closed, although now (end July 2020) some foreigners are allowed to enter Thailand. This of course has a huge effect on the tourism sector in Thailand. But mind you there are a few other sectors / groups of people in Thailand that are hugely effected by it.
Schools need foreigner teachers but if a foreigner wants to go work for a school he will need to get an other visa. And that can only be given at an embassy outside Thailand.Factories & construction depend on cheap labour from Cambodia, Laos and Myanmar. But they all left Thailand and now can not come back.Tourists stranded in Thailand because they could not return to their home country.Thai people (with family) abroad that can not return to Thailand. But let's get back …
Read more