A few days ago the news about his death reached us, we did became befriended when he was working at our house last year. He became only 63 years and left behind a wife, daughter and 3 brothers. A hard working man from a small village in Pua district. Always friendly, always smiling and always willing to help. And never complaining about his own problems, maybe he should have .... cancer is high on the list of cause of death in Thailand. Especially upcountry where it is not easy to get good healthcare.

So yesterday evening we went to the third & last evening wake and that was a bit different as normal. As normally there is a group of monks chanting for a good return in the circle of life & death. But this time there was only 1 monk. A famous one in Nan province, from a Buddhist meditation center. He started to talk about the life of our friend and he tried to make it a nice story to listen to, with a joke & smile. Then he talked about the problems & joy in all our lives. And he ended with telling the temples in Thailand are becoming less popular for people to become monk, so he was inviting all male's to join his temple if they liked. At the end we offered some money to the family, what they again will give as tambon to the local temple.

And today was the mourning ceremony at the local crematorium. Normally in Bangkok or in North-East Thailand this is always at a temple. But here in North Thailand this is most times somewhere out of the village, between trees. It gives me a more serene feeling. Of course there were again monks, 16 to be precisely. After some chanting for a good return in the circle of life & death it was time for family & other important people to make tambon and offer Buddhist robes & money to the local temple.

The last ceremonial is that the direct family members of our friend will hold the rope that goes to the coffin and that rope is cut by a monk. As the final goodbye to their husband, father and brother. And then the cremation starts in an almost old fashioned way. As you see at the photo above there is no modern crematorium with gas-burning. First all the flowers and the foot of the coffin are removed and the coffin sinks a little bit into the cement steps. Then the cover of the coffin is removed and a jerry-can of gasoline is poured into the coffin. Under the coffin a stack of wood and other burning materials is placed. Then the lighting of the burning starts with a kind of firework that in the end lights the fire. And while the first flames engulf the coffin it is for the most people time to leave, as the soul of the person who died might catch you. One person is staying behind to supervise the cremation and check if the cremation is done properly. The next day under supervision of monks the family will gather the ashes.

Personally I prefer a burial, to me that is more natural to do. Going back to earth. And personally I am not religious so I would skip the monks. And I find all the VIP's offering tambon a bit weird. But in the end it is all about the feeling of the family of the person that is passing away. And I must say this kind of final goodbye feels better as I have personally recently experienced in my home country. It feels closer and more personal. Safe travel my friend, it was an honor to meet you. Your smile & generosity will be missed.

In the past I did write a few times about a final goodbye of friends or neighbours, have a look at Safe Travels. 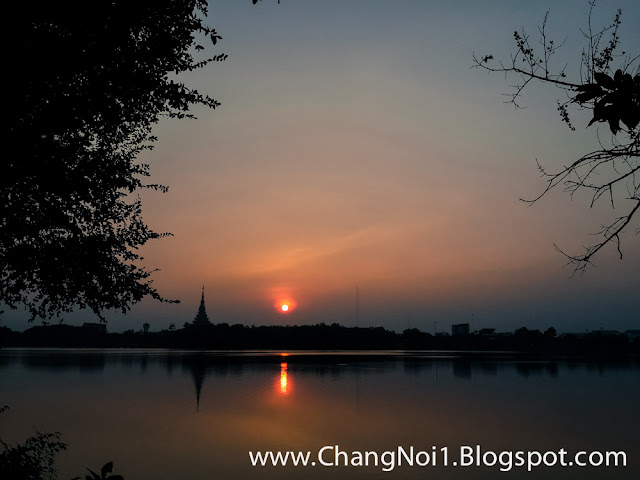 Reposting from 2015. While living in Khon Kaen this was one of my favourite spots in the late afternoon, Bung Kaen Nakorn. It is a lake in Khon Kaen city (there are actually 3 big lakes in the city). Around the lake is a kind of park where in the morning and afternoon/evening people come to exercise (jogging, aerobic, bicycling). At the north-west side of the lake is a market where of course food is sold. And along the lake are a few restaurants. A lovely place to spend the early morning or late afternoon.
Read more