Rubies and other tourists traps in Thailand 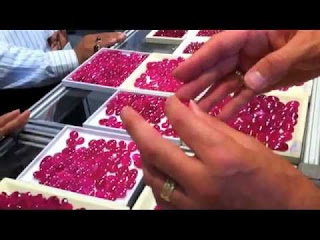 It’s 8 in the morning and we are suppose to be leaving our hotel in Bangkok, everybody is already in the bus. But 1 guy is missing, he is sitting in the lobby “One moment, I am waiting for the guy to deliver the rubies I bought yesterday”. Excuse me? Yesterday on the street you did buy & fully paid rubies from a guy walking on the street? And now you seriously think that this guy is going to bring the rubies? And even if he is coming do you seriously believe it will be real rubies?
Yes it really happend as part of one of the famous tourist traps in Thailand. But there are more ways to scam a tourist.

The friendly helpful guy on the street.

I am walking near the Grand Palace and a smoothly dressed Thai guy walks up to me and says “Going Grand Palace? Sorry Grand Palace closed” and while I keep on walking “But my friend can bring you with Tuk Tuk to other temple” and while I still keep on walking I point out a government sign “Grand Palace is daily open from … “ and just smile back at the guy. Just like once I was just watching this game being played at Charoen Krung Road near my hotel. To help the tourist I told them not to believe the Thai guys (whatever they had told). Once the tourists were gone I suddenly was surrounded by 4 Thai guys that were not so happy “Why you that?” and I told them that they are pulling a scam. Then “We just try to make money”. So I asked them to do it in a better and honest way without lying & cheating. Luckily at that moment my driver was passing and I walked with him to my hotel.

Once I agreed to a Tuk Tuk driver to drive me around to bring me to shops where he would get money for gasoline even if I would not buy anything. One of the stops was a gem-stone shop. It was a rare opportunity, today was the 1 day of the year that the government tried to promote the gem-stones and I did not have to pay tax. Hahaha yes right, in that way you can not claim tax-refund also. And in that way you never find out you paid to much. I was shown the way of trade of the gem-stones and how they are cut and how to see the difference between real and fake or between good and bad stones. Then of course I was taken to an upstairs room where I was offered to buy stones ranging from 500us$ to 6.000u$. Hahaha do they think I have that much money with me? Needless to say my Tuk Tuk driver was gone when I left the shop.

Changing money on the street, can be a nice trick also. I once changed 100us$ and was given my bundle of money. While I started to count the money the guy realized I would be missing some money and suddenly he came up with an extra bundle of money.

The Tuk Tuk driver and your hotel

I arrived at the bus station and asked a Tuk Tuk driver to bring me to my hotel. “Sorry closed”. Really? “But I know another good hotel” …. While driving to his hotel I knew we would be passing my hotel also. So halfway I said “Please stop” what he did while realizing that I would go to my hotel. Suddenly he wanted more money. “Why? Because you not get your commission now? Sorry your problem”

The Songtheauw driver in Pattaya

Songtheauw driver are also a special breed. I needed to go to a shop at the end of the 2 km long street so I took the Songtheauw just leaving the bus-station (full with tourists) and at my destination I did ring the bell and jumped off to pay. “That’s 40 thb” …What? You mean 10 thb? ….. “No 40 thb” …. I am not going to pay that. Then he pushed me angry back in his Songtheauw “Then I bring you back” … OK I have time and I knew we would be passing the office of the Tourist Police. So when passing it I did ring the bell again and he did stop 100m away. I again jumped out and asked him to follow me to the police where I would pay him 10 thb. He starts to yell and call me dirty names and drives of. Welcome to Thailand!

The biggest tourist scam : Double pricing sanctioned by the Thai government. OK in some places I can understand, like a local temple that is overrun by tourists (but the temple should be free for Thai). But most time it is utterly bullshit excuse for stealing. Like at tourist venue's like Tiffany, Under Water World Pattaya, cable-car to Wat Doi Saket, Nong Nuch Park and of course all national parks and many more. Although at national parks most times I get away with showing my Thai diver-license. The worst national park scan is when going to Phreah Vihar. You are driving on a normal public road and suddenly it becomes a national park for the last 6 km or 7 km to the car-park to go to the Phreah Viharn in Cambodia.
LABELS : Thailand Travel-Tips