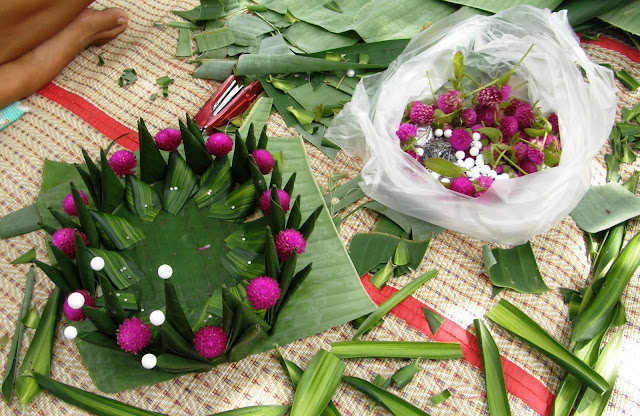 In November 2010 the evening of the 12th full moon is celebrated the festival of the light in Thai called "Loy Kratong". Loy means "floating" and the Kratong is a floating Lotus flower with a small candle and 2 joy-sticks. Sometimes even with some small coins to bring good luck. It is said to be originated as paying respect to the spirits of water where we all come from. So tonight thousands of people in Thailand (and some parts of Laos) will bring their kratong to the water (river, lakes or the sea) and put it gently in the water and make a wish.
So this morning first of all my wife did wake-up very early to go to the temple to bring food to the monks. After that she and 3 friends of her did cut down a banana tree in the garden and did cut it in slices. And of course they took some leaves from the banana tree. Later they went to the market to buy small candle's, joy-sticks and flowers. And after a good som-tam lunch the job of making their own kratong for tonight started. First the slice of the banana tree is covered with the leaves from the banana tree and then they make small lotus-looking leaves from that same banana tree leaves. Then the small flowers they bought are sticked around the kratong to give it more the lotus-form.

And so slowly the kratong gets it shape to become the "Loy Kratong" for tonight. Although we live not far from the sea tonight we will celebrate Loy Kratong at a "klong" (canal) in our own small village about 1km from our house. Many people will gather together, there will be food and Seang Som and maybe even music. And it becomes more and more fashion to light up a lantern with a candle (wax) that goes high into the sky. Thousands of small light fill the sky. Wondering how it will be tonight as all those thousands of lanterns go so high up in the sky that nearby airplanes approaching the airport are not so happy with it. And of course all that goes up, most come down somewhere ... Well tomorrow's posting will be what happened tonight.