Traveling over Phahonyothin road from Bangkok to Mae Sai 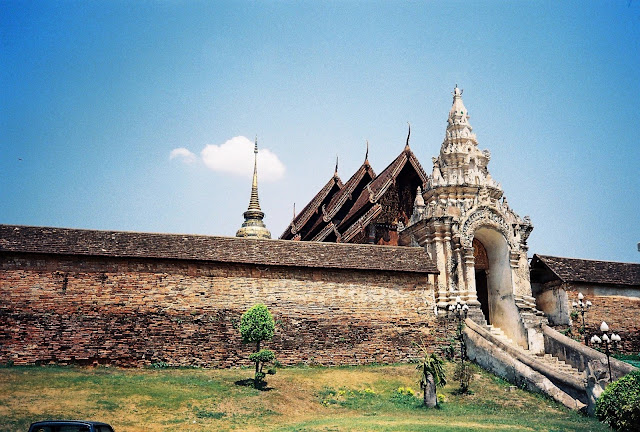 In my serie about Highways in Thailand this is Phahonyothin road (Route 1) what was originally build as Prachathipatai Road to Don Muang. In 1938 it was extended to Singburi and renamed Phahonyothin road after General Phraya Phahol Pholphayuhasena. Nowadays route 1 begins at Victory monument in Bangkok and goes all the way north to Mai Sai where it connects to Tachilek, Burma with a total length of 1.005-km. Phahonyothin road is also called the Asian Highway 2.
Phahonyothin road is the old route from Bangkok to Chiang Rai but nowadays most people take first route 32 and ten route 1. Or even route 32, route 117, route 11 and then route 1.
Phahonyothin road is a bit weird road, it begins in Bangkok at a marker of Thai history (Victory monument) and goes north passing Chatutak Market and the old airport Don Muang and finally end-up all north-west at Mae Sai. But after exiting Bangkok it first goes east to Saraburi (to connect with route 2), and Lopburi and Tak Fa. Then Phahonyothin road goes west again to Chai Nat and then finally it goes really up north.

So lets start at Nakhon Sawan, where route 1 crosses the Chao Phraya river, although a new bypass-road makes you passing Nakhon Sawan city at all. On the east side of the city is Thailand's biggest man-made fresh-water swamp (Bueng Boraphet). And when driving really trough the city you will see the mountains of Nakhon Sawan with on top of one of them a huge image of a sitting Buddha.

After Sakhon Nakhon the road goes more west in direction of Tak. And along the way passing Kampheng Phet with the world-famous UNESCO world-heritage archaeological site “Kampheang Phet Historical Park” (and a 70 km north of here is Sukhothai the first capital city of Siam). Kampheang Phet is world-famous for its historical park, but Thai-famous for it’s weekend recreation on the beach of a small island in the Ping river. Along the banks of the river are many resorts and in the weekend the island is full with Thai Holiday-makers.

From here the road goes to Tak, also along the Ping river. Tak is a nice, small provincial city with some hotels. Along the river-side is every evening a local market with a lot of food of course and behind the modern river-side buildings are small streets with old wooden Thai houses. It makes a good place for a stop-over.


After Tak the road starts to go into the mountains of the north in direction of Lampang. Just before Lampang is the “Wat Phra Tat Lampang Luang”, one of Thailands most beautiful Lanna style temples that I have seen. Lampang city is a small city famous for its many Lanna Style temples and of course for the horse-carriage ride that you can still make there. It is like Chiang Mai must have been 20 years ago.

After Lampang the roads goes straight into the mountains in direction of Phayao, a very small city along a huge lake (Kwan Phayao). A great place to make a stop for a lunch or a coffee and enjoy the beautiful view over the lake. After Phayao the road leads over the mountains to Chiang Rai, along the banks of the Kok river. It is a provincial city used as home-base while traveling up-north. There are a lot hotels and guesthouses and it is famous for the hill-tribe market near the bus-station. Of course it is not so much “hill-tribe” anymore but still a wonderful market to visit.

From Chiang Rai the road goes straight north to end at Mae Sai, the border-town with Burma and almost the most northern point of Thailand. And this is a part of the world-famous “Golden Triangle” area. The border area in Mae Sai is one big market that continues in Tachlitek in Burma with all kind of goods from Burma and China. Although it is the end of route 1, its is a good starting point to travel along the Burmese and Thai border and further on along the Mekong river bordering with Laos. 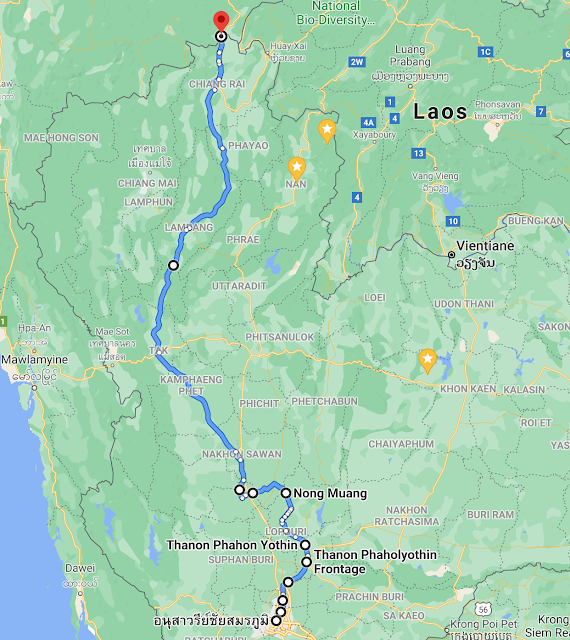