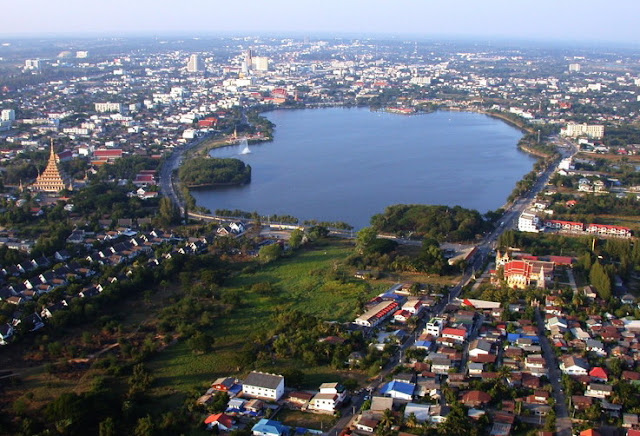 Khon Kaen city is a educational and administrative center of the Isaan and has been developing fast in the past years. Was it 10 years ago still very difficult to have a nice western meal or a first class hotel, nowadays there are many good restaurants and hotels. And it even has now international rewarded hospitals. And since a half year even a huge Central Shopping Mall with all the shops you might need (or not). Yes, modernisation is coming to Khon Kaen also.

Does that makes it less attractive to visit ? No, it is still a very much Thai city with interesting things to see. The main strip of entertainment & restaurants is around the area with the main big hotels like Pullman Hotel, Kosa Hotel, Chanroensri Hotel and now also Glacier Hotel. There is also the second modern plaza called “TukCom” (originally an IT shopping mall) with a Starbucks and Tops supermarket. In this area are a few bars, restaurants karaoke’s and pub’s with live-music. Gathering for both Thai and western people.

In the south east of the city is a lake “Bung Kaen Nakhorn” lake with some restaurant and again pub’s with live music gathering mostly for Thai. And of course Kiwi Café and 2 or 3 smaller hotels. Around the lake is a kind park where in the evening people come jogging or just having a chat with each other. Along the lake are then also small street-side restaurants. A nice place to watch people and see Thai culture. Along the lake is the famous 9-store “Wat Nong Wang”. Just west of this lake is the first modern plaza of Khon Kaen called “Fairy Plaza” with the first McDonald's! And at night there is a colorful night market when one of the street a block away from this plaza is closed in the evening.

At the north of the city where also the government buildings are is the centre for all the students. And with all the different faculties there are really thousands of students. And so there are many small restaurants and pub's. Khon Kaen seems to become also a place for western retirees to live with their Thai family and enjoy the clean air and Thai provincial city life. Khon Kaen is easily to reach by bus from Bangkok or actually from any big city in Thailand. And by train or airplane from Bangkok.

Update August 2018 : The lake does not look anymore like at the photo above as they did build a bridge and made the lake smaller.
LABELS : Isaan Khon Kaen province Khon-Kaen Thailand Travel-Tips
LOCATION : Khon Kaen, Mueang Khon Kaen District, Khon Kaen, Thailand