Beyond the bridge over the river Kwai in Kanchanaburi 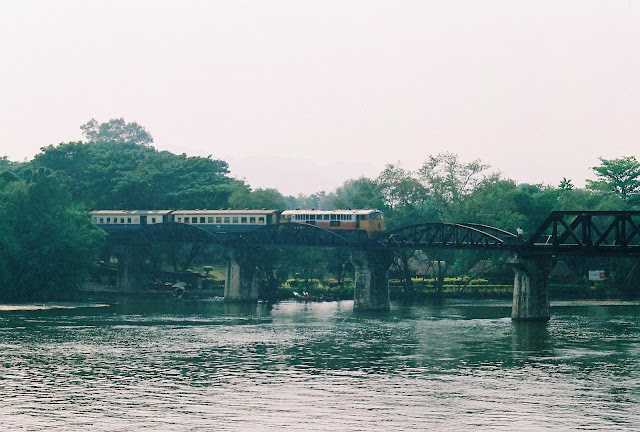 Throughout Thailand Kanchanaburi is known for its strategic position between Thailand and Burma. And during the many wars between Thailand and Burma the Burmese used the valley of Kanchanaburi to enter Thailand and in the end they even destroyed Ayutthaya, the second old capital of Thailand. When I traveled for the first time to Kanchanaburi I only knew the infamous “Death Railway” that was made by 250.000 Asian labourers and over 60.000 British, Australian, American and Dutch POW during the Second World War under the occupation op Japan. And of course I knew the famous movie “Bridge over the river Khwae” that is actually not shot in Thailand at all.

Kanchanaburi is situated west of Bangkok (Krungthep) and in a straight car ride only about 2 hours drive. But via a little sight seeing route one could visit the "Floating Market" (Talad nam) in Damoen Saduak and on the way also visit one of the once many coconut plantations in this area. Nowadays Kanchanaburi is a place of retreat for the Bangkokians to escape the busy and polluted city in the weekend. The natural surroundings of Kanchanaburi with its many National Parks and waterfall’s are a big attraction for Thai people in the weekend. And in the evening the younger ones will join together at the many disco boats at the joining point of the Mea Nam Khwae Yai and the Mea Nam Khwae Noi to eat and drink.

Just like me the first time, the most western tourist only see the famous tourist attractions and some of them even make only a one-day trip from Bangkok. This time I took the ordinary train from Bangkok Noi (Thonburi) to Kanchanaburi. In town there are plenty of guesthouses along the river, I choose the Sugar Can Guesthouse, with a few little wooden rooms in a lovely garden and managed by a lovely lady from Singapore. But just outside of town there are also very nice resorts, like The Felix Resort.

I took a samlor to the Military War Cemetery in the center of town (there is another just outside of town and a third one in Burma). Here are buried some of the 12.399 POW who died during WO2 while building the famous “Death Railway” that is under care of the Commonwealth War Graves Commission. It’s an impressive sight to realize what war can do (and by the way is still doing). And in my personal opinion it is a shame that there is brought no honor to the 90.000 civilian laborers (the so called Romusha) who died here also.

After that I took again my private samlor to the “Bridge over the river Khwae” which is said to be still the original one. It is still used twice a day for the train between Bangkok Noi and Ban Nam Tok. With some friends together we took a lunch on a raft that took us to the JEATH War Museum. This museum is build by a monk and is a kind of replica of the housing for the POW. In a hot non-air-condined atmosphere, where you can experience through photos and drawings from the POW’s how life must have been. Not something to cheer you up. If you still have some time left you could take a train trip in the second-class non-air-condined train wagon over the “Death Railway” in between of the mountains and the river. I did stay for 2 nights and the next day I did visit The Hell Fire pass memorial (80 km outside Kanchanaburi city) at Ban Konyu that is dedicated to those POW’s and Asian laborers who suffered and died at the Hell Fire Pass and elsewhere in the Asia Pacific region during the Second World War. There is a museum founded by the Australian government with a 4.5 km walking track that leads you to the hand made cutting trough a mountain. Later I came back many times to discover the other Kanchanaburi. Not for the nightlife entertainment but for the culture and nature near Kanchanaburi city.

As Kanchanaburi is situated in a valley in what was once a jungle there are many parks and waterfall’s in the surroundings of Kanchanaburi. I once took the train to Ban Nam Tok on a Sunday and went to the waterfall Sai Yok Noi. It’s always a busy day at Sunday and there are many Thai families who are eating, drinking and playing in the waterfall. So far away from the city of Kanchanaburi there are also beautiful resorts in the middle of the jungle, like River Kwai Jungle Rafts. In the years to come this would become one of my favorite places to stay. Just like the waterfall Sai Yok Yai and the Erawan waterfall with his many plateaus. Years later I would travel much more east-warts to Sangkhlaburi and the "Three Pagodas Pass", an indeed amazing part of Thailand. See Sangkhlaburi a hiddengem
LABELS : Bridges Central Thailand Kanchanaburi Kanchanaburi province Thailand Tourist-Attractions Traveling
LOCATION : Kanchanaburi, Thailand