Bicycling along the klongs of Bangkok with Co Van Kessel 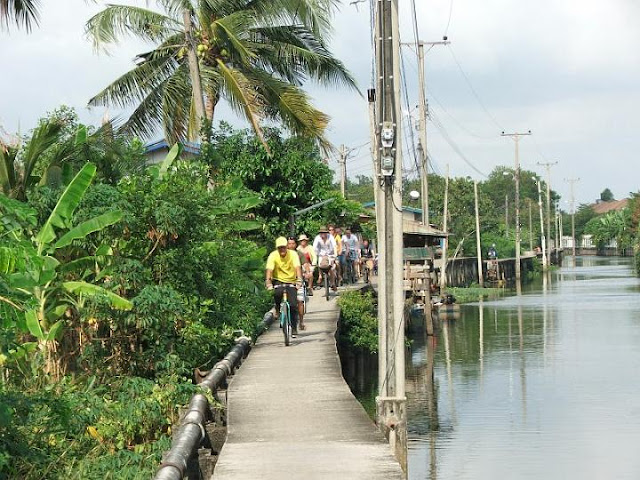 A story about a bicycle trip in Bangkok that I made in 2006. After I have been living for almost 2 years in Bangkok at Phra Kanong and not seeing much more as the busy city life of Bangkok I finally took the chance to see another side of Bangkok. Two friends of mine were coming on holiday and they wanted to make a bicycling trip in Bangkok. As I would like to see my friends again I made a trip to Bangkok for a few days and decided to make the bicycling trip together with them. Nowadays there are at least 5 companies who make bicycling trips in Bangkok. But we did choose the one who I think is the inventor of this kind of trips in Bangkok, Co Van Kessel. He lives now about 30 years here in Bangkok and has always been wandering around on his bike in the small soi’s (streets) and along the many klongs (canals) that still exists in this city that once was called the "Venice of Asia". So at 1 o’clock we had an appointment with Co at his home at On Nut from where our 5-hour trip would start.

We were only with a small group, my two friends, another tourist and me. And of course Co at the lead and in the back a Thai guide to take care nobody would get lost. Now with a small group losing people is out of the question but with a big group it sure will be a problem. So after choosing one of the many bikes that Co has in stock we left his home. We did start our tour near On Nut in the direction of Klong “Phra Kanong” and within a few minutes the busy city of Bangkok fades away and we are in a small village with old wooden houses, schools, temples and mosques. We ride on small concrete “bridges” build along the klongs, about 1 meter wide with sometimes sharp curves. As the klongs are still used for transport we have to take also many real bridges made of wood. After about one hour we stop at small shop were Co treats our thirsty mouths with a drink. Something Co would repeat every coming hour. And we needed it, as bicycling and the hot sun are not a good combination.

After Klong “Phra Kanong” we turned around to the outskirts of On Nut in the direction of Lat Krabang. As this is a Muslim area the Buddhist temples faded away and beautiful Muslim mosques rise up. But the people are still the same friendly smiling Thai people as everywhere else in Thailand. Like Co said, “Here the people are first of all Thai and then Muslim”. Here the area is becoming more open and wide with more palm trees and between the old shady houses some rich people build themselves their castle. Not in the style that I would prefer; for me the old but beautiful wooden Ayutthaya-style house would fit better. Every new path we take I’m surprised that this kind of life still exists in Bangkok. And I’m even more surprised that Co still can find his way around here and doesn’t get lost in maze of klongs, soi’s and small villages. At almost at the end of our trip we stop at a Buddhist temple that is renamed by Co as the “Disco temple”. And once inside I understand why. The all interior of the temple is made of small pieces of class in all kind of colors. John Travolta should feel at home here! Yes, Thai are really remarkable people!

Here the road along the klongs ends so from here on we take a long-tail boat that Co has ordered to pick us up here. At that moment our Thai guide seems to think it is taking to long of his precious time and without notice he just disappears. Well “mai pen rai” (it does not matter) and we put our bikes in the boat and enjoy a beautiful boat ride in the almost sunset of Bangkok. Near our starting point the boat drops us off and within a 10-min ride we are back at the home of Co. It was a rewarding trip for me. A new Bangkok has opened her doors for me, a Bangkok that I hope to explorer more in the time to come.

In memory of Co Van Kessel who passed away on 15 July 2012 in Bangkok. He will be now in peace at the place he loved so much. For tours have a look at Co van Kessel Tours
LABELS : Bangkok Bicycling Central Thailand Stories Thailand Traveling
LOCATION : Maha Phruttharam, Bang Rak, Bangkok 10500, Thailand