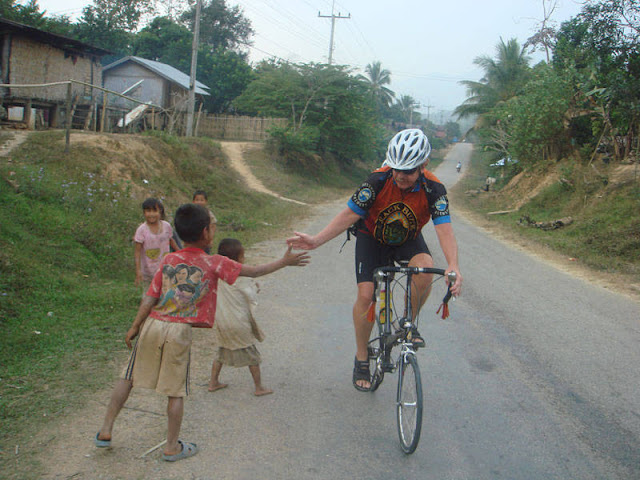 Are you planning a bicycling trip anywhere in South-East Asia?
Then do not make the mistakes we made ....

1. First mistake : Timing
It is hot here South-East Asia, mid-day about 35degrees Celsius. So we had had the idea of starting late when it is not so hot anymore. So we started at the mountain-bike trail at 16:00. Not too late as the sun goes does at 18:30, right? Hahaha big mistake! As in the jungle it will get dark much earlier and it is actually still hot.

2. Second mistake : Distance
We arrived at the park and examined the explanation of the trails of the park. That’s where we made a second mistake. As being European guys we did choose the 12 km trail instead of the 8 km trail. What is 1 2km? Depending on our limited experience the 12 km in the mountains at 35degrees Celsius were too much!

3. Third mistake : Drinking water
And at start I made a mistake by taking just a small bottle of Carabow Deang with me as drink. Of course that was gone within the first 20 min of riding. Luckily my friend had a water-bag with him.

4. Fourth mistake : The route & terrain
The first 4 km were a piece of cake and nice riding trough the woods around the reservoir. At about 5 km on the way we encountered our next mistake. Of course the trail does not always go around the small mountains, but actually goes also over it. And then suddenly they are not small mountains anymore. The trail seems to go straight up so steep that we decided to walk up with our bicycles. Here I started to experience how quickly I get tired. I had to rest a bit. After another 500-meter flat trail it went up again and that’s where we made our next mistake or actually I did. My friend saw that I was tired and that the trail was too heavy for me and he said “Let’s go back and take the short trail that we did saw about 1-km back”. As I was not sure if that was really the short trail I said “We are now halfway and once up we can only go down so let’s go on”.  How wrong could I be? I you do not know where you are going it is better to make a u-turn and go back.

5. Fifth mistake : No training, no protecting gear
And we did go on, but of course not only down. Yes also down hill very steep, so steep that it was dangerous for us without helmets (another mistake!) to race down over the slippery trail with rocks left and right of us. So we walked down the steepest parts and then back on the bike again.
To make a long story short, I was very tired, did not have water anymore, it took us much longer, it was getting dark (really dark in the tropical forest), we lost our way and I did not have telephone signal anymore. But my friends telephone still had signal, so we could contact our wife's at the beginning of the park who could ask the park-rangers to get on their off-the-road-motorbikes for a Search & Rescue Mission. I have never been so happy to hear the sound of  a motorbike in the jungle!

1. Start very early in the morning, just after sun-rise
2. Ride only so far as you are sure you can do
3. Take a lot of drinking water with your (at least a few liters)
4. Know where you going to or be prepared to loose your way totally
5. Wear protection, not only a helmet but cloves, good shoes etc.
Labels : Bicycling Travel-Tips