Motorbike Riding in Thailand from Pattaya to Chonburi and Chanthaburi 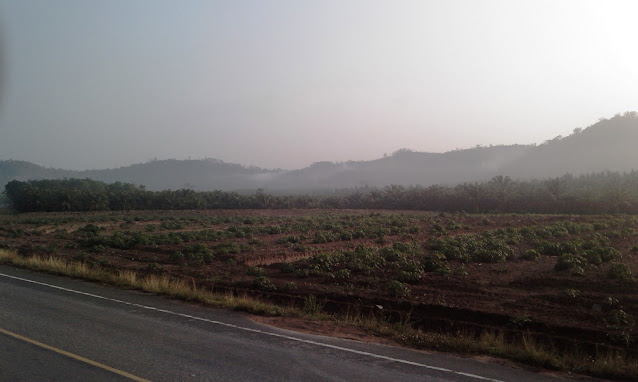 In 2011 I was riding my Kawasaki Versys 650 along the coast of Chonburi and Chanthaburi. I started my morning trip at 6 and left Khao Mai Keaw via route 331 again in direction of route 344 to go to Bo Thong via route 3245. Passing palm-oil and rubber tree plantations. And a small mountain with great view of the area.

At the end of route 3245 there is a temple with a huge sitting Buddha and a very big golden stupa. But I could not find the Chinese graves that must be here also. After the temple I went in direction of Khlong Takrao, next to a huge beautiful lake (reservoir). I tried to ride around it but failed as the roads became worse and worse, just sand and no houses anymore. So I drove back to the beginning again and drove in what I was thinking was in direction of home. Well after driving 50 km without any other roads I suddenly saw a sign "Aranyhaprahet" and I knew I was driving in the wrong direction. After passing 2 military check-points I also saw a sign of the national park I was riding trough. Monkeys on the road and a lot of elephant shit along the road. Just after the park I found myself a nice coffee-shop and the friendly lady explained me where I was. As I did not want to ride the same way back again I decided to ride on to the 317 and drive back home via Chantaburi via Sukhumvit to Rayong and then the 36 back home. Once on the 36 I joined a small group of 3 brand new Honda CBR250R's with young Thais on it (wearing flip-flops & T-shirts). It was busy on route 36 and I just take it slow as I do not want to end up like the big accident that I saw just after the National Park. A big truck had a head-on collision with a pickup-truck. For more motorbike trip reports in Thailand see MOTORBIKE TRIP REPORTS.