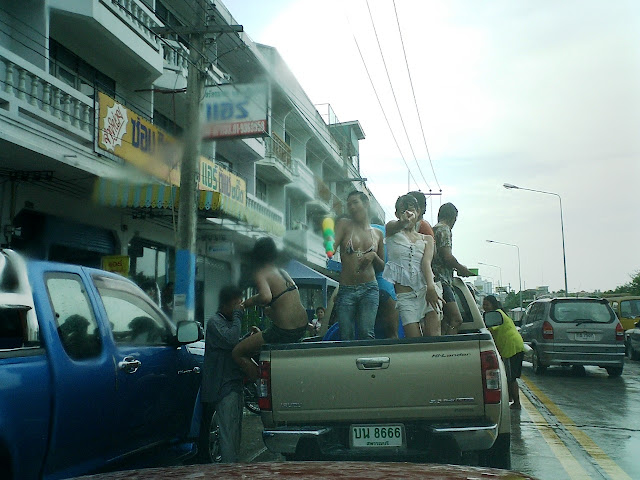 In April 2011 we celebrated Thai New Year in Pattaya. After Western & Chinese new-year in Thailand is also celebrated Thai new-year, Songkran. Although originally celebrated as a day of the Buddhist moon-calender it is now celebrated on a fix day 13 April and 14 and 15 April are celebrated as Songkran family days. It is not only Thai new-year but it happens to be celebrated at the hottest time of the year, actually just before the raining-season should start. Songkran is the time for spiritual cleaning and renewal as showed in the original way of celebrating Songkran. Families return home to gather and pay respect to the elder by sprinkling them with water and wash their foot. Songkran is also the time for paying respect to the deaths by cleaning Buddha images by sprinkling water over the Buddha image. But also by cleaning the bones of your deceased family and place their bones at the temple.

As in the international image of Thailand and Songkran only the water has been remembered nowadays and Songkran has become a huge party of trowing water over people. Which is actually nice as it should be the hottest time of the year. So nowadays Songkran is a week of party for both Thai and tourists. As this year Songkran is in the middle of the week, people have to take only 2 extra holidays to have 9 days of holiday. So starting from the weekend of 9 April up to the weekend of 17 April Thailand will turn into total chaos. People will close their shop and go to their family upcountry, which always results in a total chaos on the Thai roads. And as always many people will die on the chaotic roads of Songkran festival.

There are a lot of Thai and western tourists that plan their holiday to have a Songkran festival party in Bangkok, Pattaya or Chiang Mai. And if you want that then you should have your hotel reservation already because Chiang Mai and Pattaya will be fully booked. Although Songkran is officially from 13 to 15 April, in some places it is celebrated on a little bit different days. Or like in Pattaya where the Songkran kicks of just after it ends in Bangkok, so the weekend of 16 and 17 April and maybe a few days longer will be a huge water spectacle in Pattaya. Especially along the beach road near Soi 6, 7, 8 and 9. An all caravan of pickup-trucks filled with water-drums and dancing people will be on their way to Pattaya and they will start their party all along Sukhumvit road. By 11:00 the morning it will take you 1 hour to get into Pattaya, by 2 in the afternoon you will be hopeless stuck ed. But is is a great party!