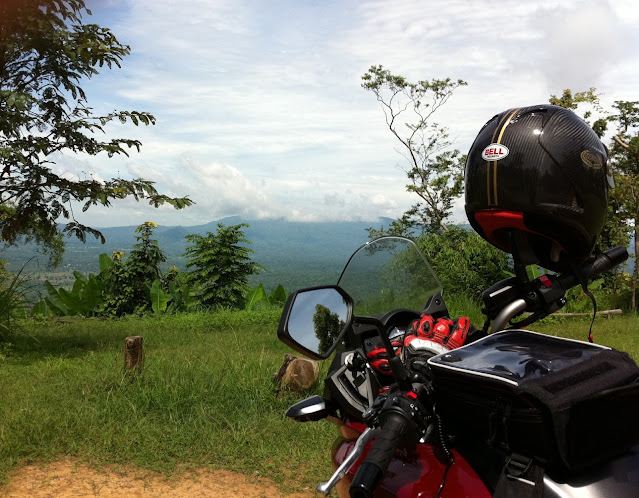 In 2011 I was riding my Kawasaki Versys 650 for a trip to Khao Yai. As my wife did wake-up at 5am to prepare food for the monks in the temple I did look out of the window and despite it being the raining season it did look like a bright day to become. So I took a shower, put on my riding-gear and at 6am I was on the bike. Although only a few km along Khao Mai Keauw via route 3240 it is a nice part with brand new asphalt with some curves and early in the morning not much traffic. From there I took a left onto route 331 and did drive in direction to Kabinburi over the 331 and 304. This route is a bit busy and really a pleasure to drive. About 1 km before the 304 hits the 33 I made a kind of breakfast stop for both me and the bike at a good PTT gasoline station. After Kabinburi riding starts to be bit more pleasure when you are starting to go into the mountains, now riding in direction of Wang Nam Khieo. Along the way I made a stop at Ban Tab Lan at the head-quarter of "Tab Lan National Park" which seems only to be the HQ and nothing else.
For more motorbike trip reports in Thailand see MOTORBIKE TRIP REPORTS.

After Ban Tab Lan the road goes higher in the mountains and while riding you have to great views. Halfway at Wang Nam Khieo I made a u-turn to take to Ban Thai Samakki and followed the rout until end at "Tab Lan National Park" where is a great view point and camping ground. I took the same way back and had lunch at Jungle View Restaurant & Hotel (at Ban Thai Samakki) where the owner told me that the back road there goes all the way to Pak Chong Chai (70km). Too much off-road for the Versys but a great road on a real off-road bike. After lunch I drove back to Wang Nam Khieo and took the 304 again in direction of Kabinburi but before heading down I took a turn right to route 3052 in direction of "Khao Yai" and Pak Chong. Along the road are many restaurants and hotels like "Cup of Love". 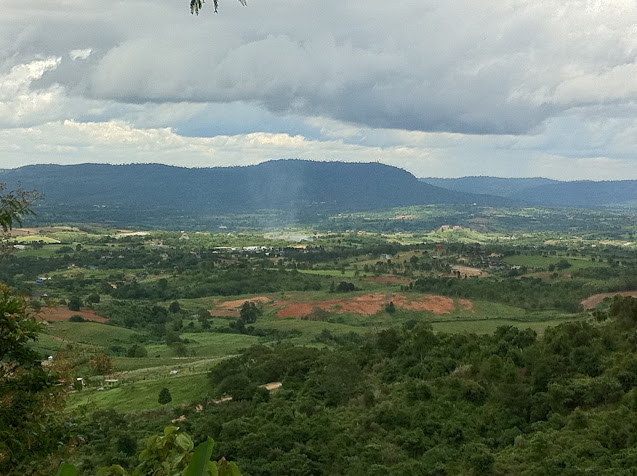 Also along the road was a sign to "Khao Phang Ma" and it was only 4km .... first the small road cement tarmac, then asphalt tarmac and then a lot of put-holes. Then only gravel and sand, but still a good even good for cars. I made it up to a great view point and decided it would be safer not to go on alone on the bike in  the middle of nowhere. So I drove back and passed again the few mud-pools, and at the third mud-pool it did go wrong with the "Dunlop mudd-magnet" tyres. At a very low speed of 10km/h I slipped in the mud and fell. I was not hurt at all but in the middle of the mud I could not get the bike up anymore. So there I was about 3 km from the nearest house and no other people at all. I just took a rest and then after 5 min I was lucky as I heard the sound of a truck. A truck with some friendly people did help me to put the bike on his wheels again. The bike and me were full of mud, as were the tyres. Before riding off I cleaned the tyres a bit and at the main road I found some water to clean myself, the bike and the tyres better.

So I continued my ride on route 3052 in direction of "Khao Yai". It is a nice road with good asphaltt and nice curves. Just before Wang Mi is a lake (water reservoir) with the road going right along the water. There are many restaurants and hotels here again. Nice area to return next time. As it was now beginning of afternoon it was time to ride back again, so I made a u-turn at the lake and did ride back to route 304 to Kabinburi and route 311 in direction of Sattahip. It was a nice day, a bit longer as planned and some learning moments. 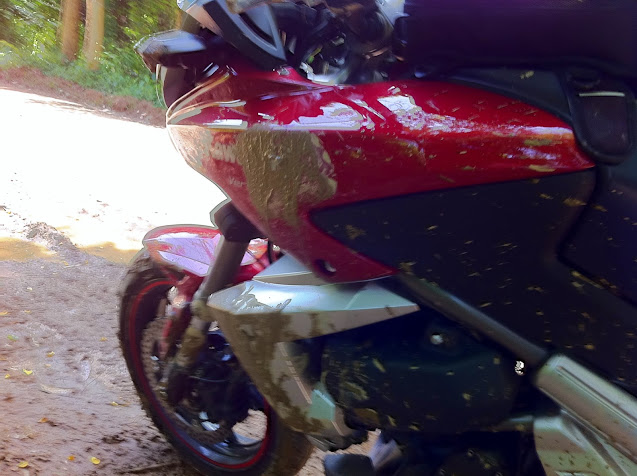