To flood or not to flood in Khon Kaen 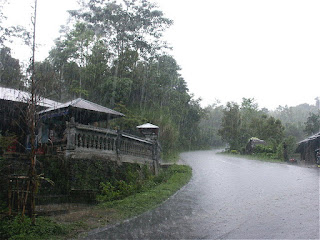 Since a few months we are living in Khon Kaen and since a few months it is also raining and raining and raining. Like I said a raining season like I have never seen before in the more as 10 years that I am living in Thailand. So I see on the news about the the heavy rain and flooding in & near Chiang Mai. And later I see on the news about the flooding in Central Thailand and even in the Isaan (North East Thailand). I see videos on YouTube of a flooded Pattaya and hear stories from people almost swimming in soi's near WalkingStreet in Pattaya.

We are living in the west side of Khon Kaen in a new housing-estate that is about 1meter higher as the already a bit higher main-road. So we actually do not experience any problems of the rain or it would only be the fact that doing your laundry becomes a bit difficult with all the rain. But well that that is nothing in compare what other people have to endure. But I also heard & saw on the news about flooding in Khon Kaen and I was wondering "Where?". Since a few days it rains much less and it has become cold, well in the morning it is 23degrees Celsius. For me that is cold. And today after a bit cold & cloudy morning it became nice weather with a almost blue sky. It feels like spring time in my home country and I felt the urge to take the motorbike for a ride around Khon Kaen to see where the flooding is.

So I took the ring road and at the eastern part of it indeed along the road you can see that all the rice-fields are flooded and even some roads going out of Khon Kaen are closed because they are under water about 30-50cm. As also are some house along those roads. Suddenly I see that the left part of the road is closed and I was thinking it was because of that part of the road was flooded. But no .... along the road had been build temporarily houses for people who houses are flooded. OK good idea .... but why the hell build those "houses" on the ring road? I am sure the local army will have some place for people to stay.

I continued to ride the ring road and stopped at a overpass and was looking to the road .... are that trucks there driving thru the water? Yes .... the all southern part of the ring road is under water! And not a little bit ... much too high for me on the motorbike! So I took the exit into Khon Kaen city at the eastern side and saw that actually the most part of the open fields are now one big lake. The good thing is Thai people know how the turn bad things into good things ... everywhere there are people fishing and having fun. Well not those people who their house or company is flooded. I did ride home and was happy that we are living on the "right" place in Khon Kaen. Now the question is .... could all the flooding be prevented by better work of the Thai government?