The Airport link to Suvarnabhumi Airport in Bangkok 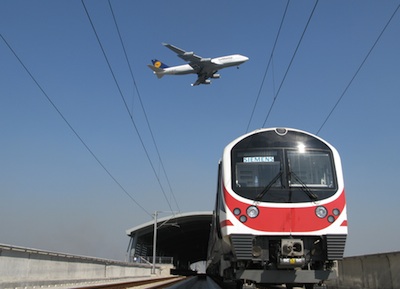 We took the airport link from Phaya Thai to Suvarnabhumi airport. And I do hear a lot of complains about it, but I must say I was very content with the service. Well we did not have much luggage with us, so that made it easier. We arrived at Phaya Thai BTS station by Skytrain and there are good and clear signs where to go for the Airport Link ... exit 5. But exiting the BTS with big suitcases is a bit of a problem, but the staff of BTS will help you promptly. Then it is a bit walking from the BTS entrance-level to the Airport Link, but you will not need to go to the street-level. In case you have a lot of luggage with you it would have been nice if there would have been trolleys. There are escalators and elevator (but a bit small one) to get to the entrance-level and later to the platform-level. No trolleys anywhere, but a lot of staff to guide you to the right place, and they understand & speak English.

At the entrance-level are fending machines to buy tickets, but there is also an counter where you can buy tickets. From Phaya Thai are leaving 2 different "lines". Well of course they use the same line, but the "City Line" will stop at all stations, while the "Express Line" will go straight to the airport.

Using the "City Line" to the airport will cost 45 Thai baht per person, while the "Express Line" will cost 90 Thai baht per person (reduced from 150 Thai baht). We took the "Express Line" and we were in 20min at the airport. All couches have some limited luggage space, but it seems that there is also a special luggage couch (but we did not look for it). The seats were comfortable as was the all ride.

The Airport Links stops right under the all airport terminal and there are elevators & escalators to go to the other levels. But again small elevators. And again no trolleys. All together a good experience, although a bit expensive because with 2 people it did cost me 180 Thai baht. OK a taxi would be more expensive but at least a taxi would bring me door to door.

Extra Extra : My first experience with the Airport Link was positive but my second one so negative that I will never use it again. First of all when I arrived at the platform at the airport the train was just leaving although according to the information on the TV-screen it would be leaving in 8secs. Then I had to wait a bloody 20min! Well that is a way of getting your trains full! Then again you realize that unloading a full train of people onto an platform full of people is not a smart idea. Something that is repeated at the end-station. And that platform is the half in size! And there are only 3 small exits stairs to the exit level downstairs. Great! Then to realize that you have to go down 2 levels from the platform to be able to exit to the Skytrain station and then again 1 level up to enter the Skytrain.

O yes and did you ever try to connect from the BTS (Metro) to the Airport Link? This is a joke as you have to walk about 600m over the street and cross a road!

BTW Do not forget that transfer from Survarnabhumi Airport to Don Muang Airport will take you about 1 hour. So in between a flight arriving at one airport to a flight from the other airport should be at least 4 hours to be safe.
LABELS : Airports Bangkok Central Thailand Suvarnabhumi Airport Travel-Tips
LOCATION : Bangkok, Thailand