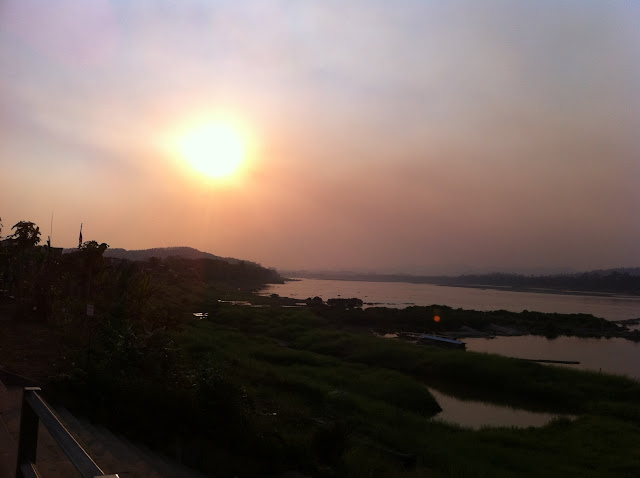 In 2015 we made a trip from Khon Kean to Khao Kho and Phu Ruea and we ended up in Chiang Khan. This time not in an weekend or holiday and not while all Bangkok was flooded. So despite that Chiang Khan has became touristic, it was like a nice laid down place should be : laid down. The main street is still like a kind of living-room for the locals. We had no reservation for a hotel so we had a look at a few hotels along the mighty Mae Nam Khong (Mekong River). There are many hotels and in the week-days the most are not even 50% full (some are even closed). Hotels tend to be a bit expensive in Chiang Khan, and in the weekend the prices will even be higher. We did finally choose the then brand new Sri Chiang Khan Hotel.
The small street along the river is full of old fashioned shops selling a kind of souvenirs. And there are a few restaurants. It is nice to walk and relax and just to go with the flow. So we walked from one end to the other and back via the small "boulevard" along the riverbank with a beautiful sunset. We did found our self a nice restaurant with outdoor seating and enjoyed the still cool weather. We walked back to our hotel and had a T-shirt hand-painted.  It is a place to sleep early and wake-up early, so we did. The next day we did wake up at 6 when the monks are going to the streets to accept food as alm. We had breakfast on the verandah of our hotel, with the french baguette that I had bought the evening before. A bit a pity that the hotel only serves that cheap "Best Food" jam. So after breakfast and a morning walk we left Chiang Khan to go straight back to Khon Kaen (about 250 km). Well not all the way straight as we made a little side-seeing in Loei city and on the way back we had an early lunch at "Coffee Lovely" in Nam Nao. 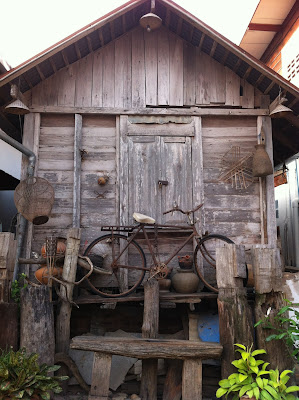