The burning haze of northern Thailand 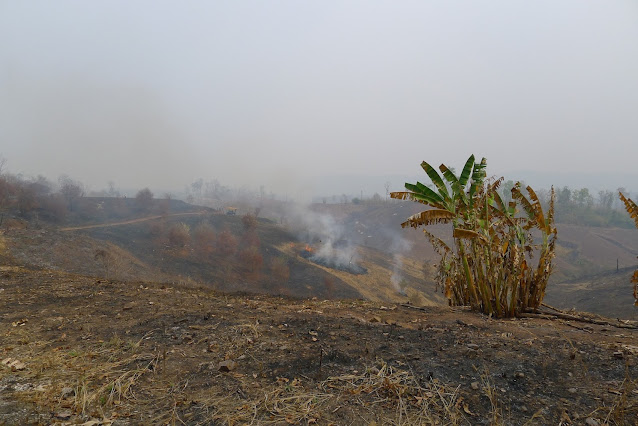 As I write ".... of northern Thailand" it is of course a yearly reoccurring problem not only in Thailand but also in other countries in South East Asia like Burma, Laos and Cambodia. What am I talking about? Every year after the raining season farmers and others start burning the old rice-fields and any other left-overs of any crop. That combined with extreme dry & hot season also creates some accidentally bush-fires. To make it worse on the high-plateaus and valleys is not much wind so the thick haze of burning is there to stay.


"Haze pollution in the North yesterday hit the highest levels in Mae Sai district, Chiang Rai, since January, the Department of Pollution Control says. The level of 323.4 microgrammes per cubic metre was recorded yesterday, after two consecutive days of the district developing critical haze pollution of more than 300ug/cu/m. On Thursday, it was nearly 306ug/cu/m. The pollution is believed to stem from both forest fires and fires that farmers set alight on their fields to prepare for new crops. In Mae Sai district, the particles have exceeded the safety standard of 120ug/cu/m since the middle of February and dramatically increased last week. The department said nine provinces in the North have been facing haze problems. They are Chiang Rai, Chiang Mai, Lamphun, Lampang, Mae Hong Son, Nan, Phrae, Phayao and Tak. Of them, four provinces have faced level of particles more than 200ug/cu/m - Chiang Rai (323.4), Tak (277.5), Phayao (250.2) and Mae Hong Son (220.1)."

So this is going on for years and big cities like Chiang Mai and Lampang are effected very much by it. So you would say that something would change of the years, except of course blaming the Burmese and Lao for burning jungle in the "slash & burn" technic (which of course also is practiced in Thailand).

Well last week I made an almost 2500km motorbike trip from Khon Kaen to Loei, Nan and Chiang Mai. And the burning starts already within the ring-road of Khon Kaen where are still many rice-fields. And guess what .... the old rice crop is burnt and nobody seems to care about it. As a result of it we had for weeks a bit hazy sky and sometimes dirt in our garden while living at least a few KM's away from the nearest place of burning. And while riding along route 12 to Lom Sak you are passing "Nam Nao" National Park and almost along the all way you could see that there had been recently small bush-fires or there were still small bush-fires. This kind of fires only burn the dead & dry trees and bamboo. Mind you this is a stretch of about 50km going thru a forrest.

Heading to route 203 and route 2014 to Dan Sai it was again burning everywhere, at Dan Sai so much that I did get dirt in my eyes. And there the fire of bamboo sounds like a big fire-work, while riding on the road you could feel the heat. The next day riding from Loei to Nan the dry, black burned grounds started again after Phu Ruea and continued all the way to Nan. Original tropical forrest? No way! North of Nan it did look much better with less plantations and more tropical forrest. But the next day going from Nan to Den Chai passing Phrae it was again all black and burning. Mind you this is about 120km of riding in desolate dry and black grounds. It made me thing of the old Russian "black earth" technic.

Until this trip I did believe the stories that hill-tribes in Thailand, Laos and Burma practicing "slash & burn" that created the smoke & haze problem in northern Thailand. But now I realize that it happens in small & big all over northern Thailand and it is practiced by farmers and all other kind of people. The remains of sucker-cane or rice? All burning. While entering a National Park there was a bush-fire going on about 500m before the entrance, nobody did try to stop it. Does anyone actually care?