On the motorbike from Loei to Nan

Motorbike trip report from 2013. A flat distance 250 km with a max. altitude of 1128 meter. We left Loei very early and did ride route 203 in direction of Phu Ruea to have a kind of breakfast at the PTT gasoline station (Amazon and 7/11). A bit after Phue Ruea we took a right turn to route 2294 which we followed until a T-section where we took a left turn to route 2195. The first part was a nice twisty road along the mountains of Phue Ruea and the second part the twisty road continues along the Thai-Lao border and a small river. For more motorbike trip reports in Thailand see MOTORBIKE TRIP REPORTS. For more information about Nan province see Destination Travel Guide Nan province, North Thailand. 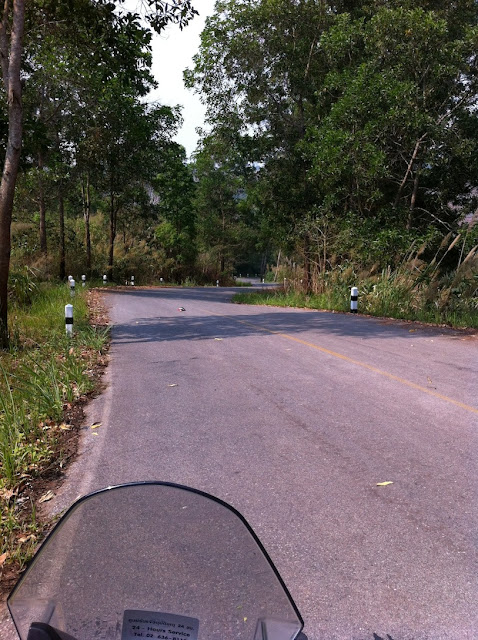 
After about 15 km this road changes into a jungle track, actually just at the border of to provinces. We tried the gravel & sand track (big enough for a car) but it was too heavy for me on my Versys so we made a U-turn and went back. While riding back Mark wanted to check out the road going to a Thai-Lao border market "Bo Bia". As it was only 6 km ... why not? So we passed a small village and there where some signs along the road like "Stop" but I just ignored them. You know there are so much weird signs along the roads.

Then we ended up at a big kind of market place with abandoned small shop-houses. There was nobody .... well there was an army guy coming to us on his Honda Wave and he told us we could not go further. Actually we could not go where we were. After about 1 km the road would be closed (sure?) and after about 3 km we would be in Laos (so there is a road?). So I asked him what is that all about? It seems that every Sunday there is a huge Thai-Lao market going on here. Well seeing about 50 small shop-houses it must indeed be an big market going on here. But well we made a U-turn again and followed route 1123 back again passing route 1241 and took a right turn to route 1083 later passing "Doi Samerdow" and "Si Nan National Park" in direction of Na Noi.

At the T-section we made a right turn to route 1026 to follow this until Wiang Sa where we to route 101 to Nan. Route 101 to Nan is a bit busy, straight and boring part of the trip. All together a nice but long trip, and we made about 80 km too much by trying the Jungle Track and checking out the Thai-Lao border market. So we arrived just before dawn in our hotel in Nan.