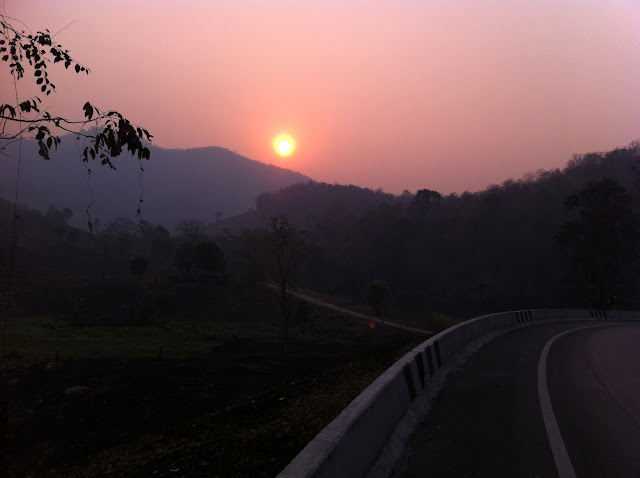 Reposting from 2017. With a flat distance off 366 km and a max. altitude of 633 meter I did it again. I did leave very early in the morning. Actually so early that it was too early for breakfast at Hot Bread (along the way leaving Nan to Phrae). I left Nan together with a friend but he decided that he would take the scenic route back again to Loei while I decided to take the main route back to Khon Kaen. So we left Nan in southern direction to Phrae via route 101 but at Wang Sia we split up and I continued along route 101 in direction of Phrae. The route is a highway going thru beautiful mountains. It was cool, well actually almost cold & chilly. And it was a bit dark for my sun-visor. But what the heck. Although not much traffic, the Thai driving style still irritates me on the bike. You are still considered a minor user of the road and totally ignored by bigger users of the road. For more motorbike trip reports in Thailand see MOTORBIKE TRIP REPORTS

So somewhere between Huai Rong and Phai Thon I took a left turn to route 1216 which changes into route 1217 at a Y-section (take right turn). The route is good and goes thru small villages and then becomes a bit smaller and less good and goes into the mountains. While being alone and in the middle of nowhere that is where I did get a bit worried. There were a few road constructions at landslides. And then in the distance I could see big trucks working on the road. Oops would this be the end? Luckily no! Just about 10 km of gravel and put-holes that slowed me down a lot. Some friendly Thai road workers explained to me that the road would be fine and that at the T-section I should take a right turn to route 1134.

And indeed it all did work out fine. Just before Nam Cham there is a nice Coffee Shop on your right hand side. Only drinks, not food. I still not get that! I was bloody hungry. At Mae Lai I did enter route 101 again, just before Phrae. While passing Phrae I stopped at the PTT gasoline station for refreshment and rest. Those PTT gasoline stations with an Amazon Coffee shop and an 7/11 supermarket are popping up everywhere!
At Den Chai I passed the sign Chiang Mai 180 km and did ride south in direction of Phitanulok. But while riding I thought "It is still early and only 180 km". So I made a u-turn and did ride back to Den Chai again to take a left turn to route 11 in direction of Lampang. It is a 2 lane scenic route thru the mountains with not much options for a stop. So I did ride into Lampang city and had lunch and rest at 'Escape Bistro & Cafe" opposite the Wieng Thong Hotel (actually there are now 2 coffee shops there). After passing Lampang I took a right turn to continue route 11 in direction of Chiang Mai. The first part is a bit boring, straight road passing the jungle market and the elephant conservation centre. But the second part is going thru the mountains and is nice and twisty. The all road between Lampang and Chiang Mai is a 4 lane divided highway. My first time on the motorbike to Chiang Mai!