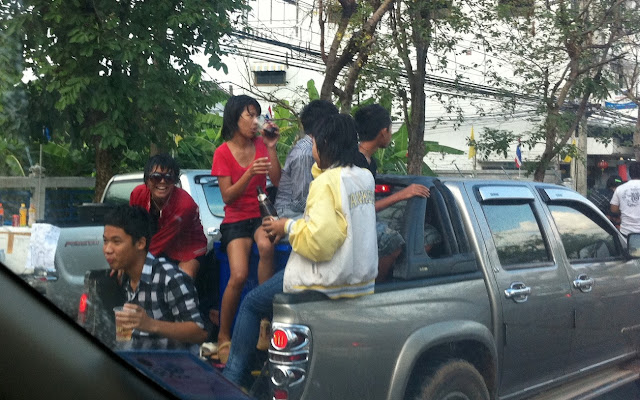 Celebrating Songkran in 2012 in Khon Kaen, for us the first time to celebrate the Thai New Year (also called Songkran) here in Khon Kaen. I use to indulge fully in the madness of the water festival in Pattaya in the years living in Pattaya. But becoming older I starting to get irritated by loads of ice-buckets in my face or full blasts ice-cold water in my ears. So no I had no intention to play the water festival here in Khon Kaen but still I wanted to know what party was going on. You know, here living in a housing-estate just out side the center you barely notice anything of what is going on in the city.

So in the afternoon I took my car to sit safe & dry and make a little tour in the city. In Pattaya the hell of madness would start around or just before lunch-time and end early in de evening. Here it seems that in the afternoon about 3 o'clock the party starts and continues to grown until the begin of the evening and will probably end late in the evening. While in the car I took some pictures. Getting into the party was no problem, but due to very bad organisation (actually none at all) it took me more as 1 hour to pass an intersection to get out of the madness.