On the motorbike to Lom Sak and Loei 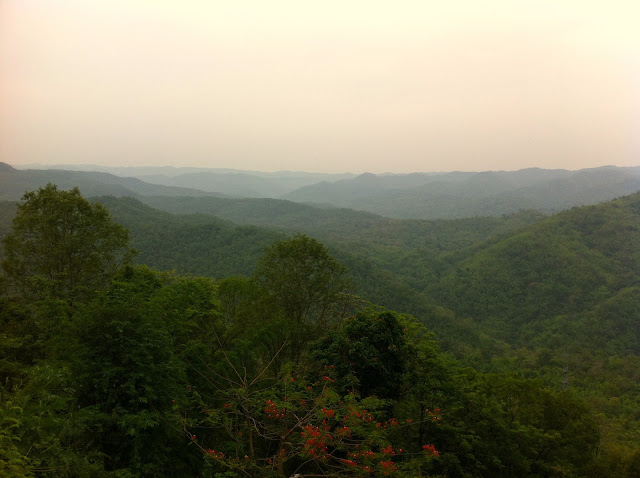 In September 2014 I extended my Carbon Tyre Print with another 630 km, and it was again a wonderful trip. I left very early in the morning when it was still cool. As usual I had no plan but I took the direction of the least chance of rain .... in western direction from Khon Kaen. For more motorbike trip reports in Thailand see MOTORBIKE TRIP REPORTS. The first part is a bit boring almost 100 km over route 12 (Maliwan rd) passing Chum Phae and continuing in direction of Lom Sak. About 40 km after Chum Phae you enter the mountain area of "Nam Nao National Park" (no entrance fee). This is where riding becomes beautiful and the air becomes cooler. Although I left early I was there too late to make a stop at one of the "Sunrise view points", well next time. At the beginning of the mountains you have to pass a check-point and almost at the end another check-point. Halfway is a restaurant & coffee-shop but a bit further is a market and view-point on your left hand side. Seeing all the green forest you think there is still hope for trees in Thailand. If you like some help with organizing your holiday anywhere Thailand send me an email at The Little Elephant Traveling in Thailand. 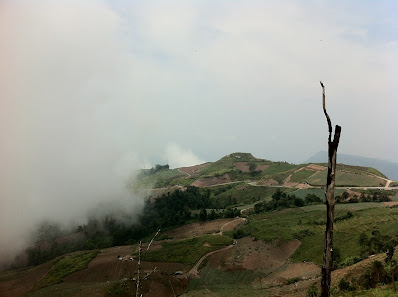 So I continued my tour to Lom Sak to fill up the bike and myself and then continued to Phu Hin Rongkla and Phu Tabeak. This is a mountain range (and National park) just north-west of Lom Sak. It has the most beautiful twisty motorbike road of the all Thailand. It goes up to about 1600 meter. On top just before the entrance of the National park there is a market and view point to relax and watch the view. Well, as there were clouds coming in there was not much long distance view, but the sight of the incoming clouds made up for that!

Just after the view point there is a small road going to the right that follows the mountain range at the top. There is a lot of vegetable growing here but also a lot of small restaurants, hotels and even a camping. It must be beautiful here at 5 in the morning! I followed this road for about 15 km but after the village Ban Thap Boek the road became too bad for riding alone, so I made a u-turn and did ride  back to the view point. 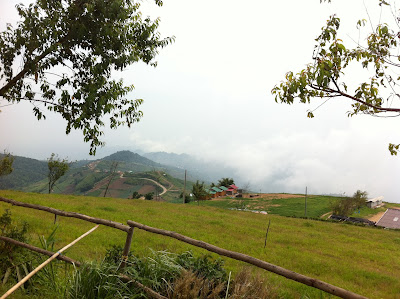 Half way riding back to the view point there is a road going to the left, up to another view point with a market and small restaurants. Slowly I realized that the clouds coming in were beautiful but also becoming black ... and that means rain! So it was about time to get off the mountain back to the valley of Lom Sak and Lom Kao. For more motorbike trip reports see Motorbike Trip Reports.

So I did ride down and had a stop at a wonderful coffee-shop along route 2372. From there I did ride to Lom Kao and continued route 203 in direction of Dan Sai and Phu Rua. Again a beautiful road to ride. But before reaching Phu Rua I took a right turn in direction of Wang Saphung as a short-cut between route 203 and route 201. Some nice mountain area with one bloody sharp, steep and dangerous curve. Dangerous because the tarmac is all pushed up by trucks and what was not pushed up was full of gravel and sand! Now I did understand all the warning signs! Just after Wang Saphung I made a lunch stop at the PTT-gasoline station along route 210. After that I followed route 210 to Nong Bua Lam Phu passing Erwan (caves) where I had a short but heavy rain pouring down over me. Good I did not stop because it only lasted 500 meter.

From Nong Bua Lam I did go south-east in direction of Ubolrat Lake where I made a stop at a view point in the small mountain range along the lake. What a beautiful view over the lake. But what is all the smoke doing there? I thought the burning season was over! Well, from there it was another 50 km back home sweet home to take a shower and relax.

Another great motorbike touring day! And the simple non-highlights are so beautiful. Every time there are new things I discover. Sometimes very nice moments but unfortunately at the time of speed and location no time to frame it in a photo. Like when I was riding on route 12 at Nam Nao National Park one of the oncoming cars was signaling with his lights and I thought "Idiot". Then I saw him waving his arm out of the window and pointing behind him. Then I thought "There might be something on the road after that curve" and I slowed down. You know the Thai movie "Bang Rajang" (2001) with that huge buffalo? Well, he is still alive and standing there on the middle of route 12 and he had no intention whatsoever to move with a look in is eyes as "Since when there is a road here?" 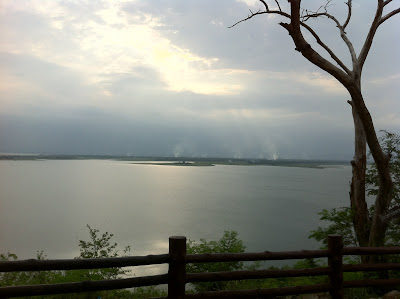