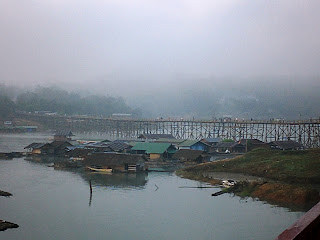 Officially named the Uttamanusorn Bridge is said to be the longest wooden bridge in Thailand and is crossing the Vajiralongkorn Lake (actually the Songaria River) in Sangkhlaburi, about 230 km west of Bangkok. The bridge is also called "the Mon bridge" because it has been hand-build by Mon people as connection between the Mon villages and Sangkhlaburi town. It is a 850m long foot-bridge and named in honour of Luangpho Uttama, a Mon monk who was an abbot of Wat Wang Wiwekaram. Sangkhlaburi along the Vajiralongkorn Lake is a small town famous for its lake and the sunken temple. As Sangkhlaburi is not on the route for western tourists it is not much visited by western tourists but the little town and surroundings are a popular destination for tourists from Bangkok.

Remark : If you look on Google Satellite you will see that maybe 500m north of the wooden bridge is also a real bridge, but that would be a huge way around to connect the villages.
LABELS : Bridges Central Thailand Lakes-In-Thailand Sangkhlaburi Thailand Tourist-Attractions Traveling
LOCATION : Sangkhla Buri District, Kanchanaburi, Thailand