Behind that sweet Thai smile 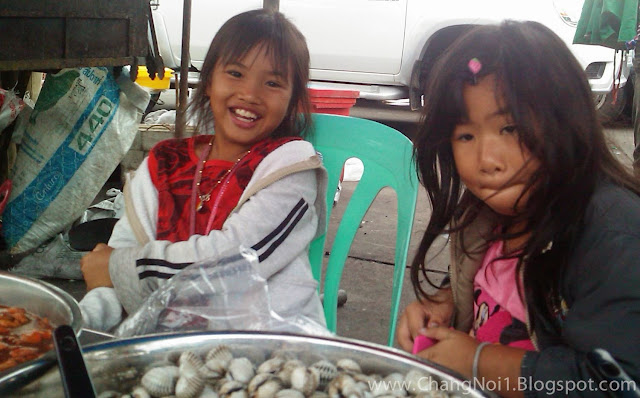 Although this is a fictional story it is based on real life events & inspired by my life in Bangkok between 2000 and 2003. It is a story dedicated to all the smiling people of Sukhumvit road in Bangkok. This story was first published in 2013.
It is 12 o'clock in the night and I'm eating Phad Thai at Sukhumvit road. Lek is working and I return to her apartment to go to sleep. Her apartment is one 16-sqm room (incl. a bathroom) that she shares with her young sister (who is not her sister of course) and older sister Joy (who is also not a sister). She told me that tonight the mother of Joy would come to Bangkok with the 2-years old baby of Joy, that is raised by her mother in Buriram. Calculation figures out that she had a baby when she was 15 and became pregnant when she was 14. A great start of life, isn't it? Well, that happens at the rural rice fields of the Isaan.
When I arrive at her room only young sister is sleeping on the floor (because the floor is cooler as the bed). So I go to sleep at the bed where later also Lek and Joy will sleep. Later someone arrives at the room and young sister opens the door. Two older women with a 2-years old baby come in. They settle down in the room and I fall asleep again. A bit later Lek and Joy are arriving in the room and they start chatting and playing. And despite the fact that young sister and me are trying to sleep the baby is allowed to play with an electronic sound machine that makes a lot of irritating noise. Then also "sister Dao" arrives and it seems that the other older woman is her mother.

The next time that I wake up it is 6:30 in the morning and the beautiful sunlight of the sunrise is shining through the door into the room. I overlook the room and see "sister Dao" sleep like a baby in the arms of her mother. Her arms around the body of her mother as she never wants to let her go again. Lek sleeps next to me and next to her is Joy. Her face is in the morning sun and she looks with a smile to her baby in the arms of her mother. That is the place where her baby feels home and safe now, not in her arms. Then Joy turns around and when I look to her I can just see that she tries to hide the tears in her face. No she will not show those tears to her baby, her mother or anyone else. She has to sleep, so she can work again the next day to earn money so her baby can have cloths, food and hopefully a better education as she ever had.
After breakfast Lek calls back home to talk with her mother. She is happy to hear her mother and the screaming voice of her just born brother. Then she is quiet for a minute and then she closes her little eyes and tears are rolling down her cheek. When I ask her what the problem is she just says 'Mai pen rai, it’s only me". But later when we are at Klong Toey market I see that sad face again and now she tells me. Her younger brother (who has been monk for 3 months) is now also living and working in Bangkok. And as she loves her family and her brother very much she would like to see her brother again after one year now. But her mother told her that her brother told nobody where he works or lives because he does not want to see his sister anymore because she is doing the work she does. And I always thought that family ties in Thailand were so strong nothing could break them? Well it seems that doing bad work can break them easily. But bad work of which he and the whole family probably have eaten the fruit.
Will I ever learn to see what is behind that Thai smile?