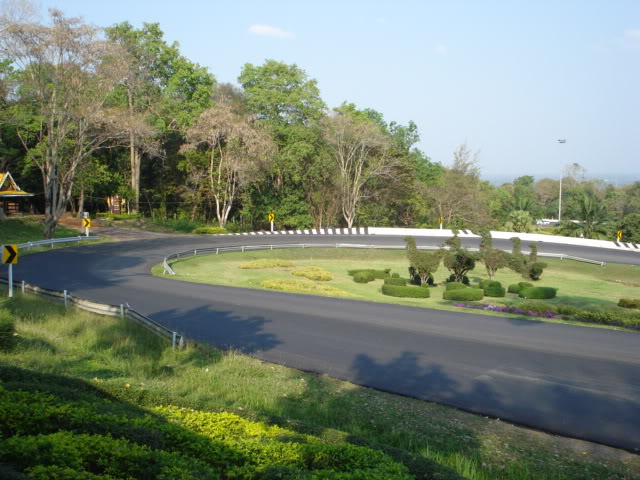 Oct'2012 As it looks like the rainy days are over I left very early in the morning in direction of Kalasin (route 12) and continued in direction of Somdet (changed to route 213) to go thru the beautiful mountains of Phu Phan and passed the famous "Snake curve" before going down to the valley of Sakon Nakhon. I Passed Sakon Nakhon on the left side and took route 22 in direction of Kuseman and Nakhon Phanom. I arrived at early lunchtime so most restaurants were still closed bit in the northern part of the city I did find a nice restaurant along the Mekong river. For more motorbike trip reports in Thailand see MOTORBIKE TRIP REPORTS. If you are interested to make motorbike trips in Northeast or North Thailand and need some information or help, please contact me by email at The Little Elephant Traveling in Thailand.

From Nakhon Phanom I followed route 212 along the Mekong river with view over the mountains of Laos. A few km's after Nakhon Phanom is the "Thailand - Laos Friendship Bridge 3", a brand new bridge that will open the gate-way to Laos and Vietnam (just as at Mukdahan about 120 km south but never mind that). I did ride to the check-point to ask if I could cross the bridge on my motorbike. The first guy said no. Then I called his boss and he said "Yes, but you need 'passport' ". Well, that might be an problem as until now I was not able to get a passport (International Certificate of vehicle) for my motorbike (for car no problem). 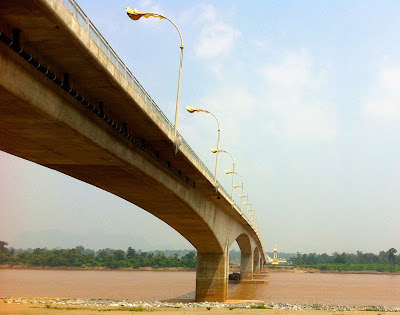 At Bung Khla (the most north-eastern point of Thailand) I passed a nice resort along the Mekong River (Monprasit Resort).  I followed route 212 all the way until Bueng Kan where is the ferry crossing to Laos. I did stay here overnight at "Mae Nam" Hotel, a bit old but clean & cheap. But it is at a good location. They do have private parking but park your bike right in front of the entrance otherwise you might be blocked by cars the next morning. Bueng Kan is a nice little town to sit, relax, eat and drink along the Mekong River. The next day I did wake-up very early, it was still totally dark. So I went to the morning market and the 7/11 and had breakfast in a sala along the river. I love the fresh early mornings. While it was getting light I did ride to "Wat Phu Tok", what is about 40 km riding back from where I was yesterday.

It was a beautiful morning ride thru the rubber plantations and low hanging clouds between the mountains. Is that called fog? So I did ride back via route 212 in direction of Chaiyaphon where I made a right-turn to route 2013 that goes between lakes (reservoirs) and small mountains. Wow what a beautiful ride! At a certain moment you have to turn left to route 6020 and then you will ride straight to "Wat Phu Tok" that is on a solitary mountain of about 100 meter high. Coming from this way you have to ride all around the mountain to find the entrance of the temple. Although there are signs all the way for the temple, of course the Thai way at the end there are no signs anymore.

Just before the temple are some shops and a restaurant, just in case you are hungry & thirsty after the 90min climb up and 30 min climb down ... as I was. And walking with your motorbike-boots and wearing a motorbike-trouser is not a smart idea. For more information about hotels or 'Wat Phu Tok" please have a look at my postings of the day before. From the temple I did hit the small roads and did get lost but finally managed to find route 222 to ride to Sawang Deang Din for an lunch-stop at Tesco-Lotus where they have a great coffee-shop that also serves good food. Highlight of the trip were the amazing beautiful lakes in the area of route 2013, evening in Bueng Kan and of course the climb of "Wat Phu Tok". Next trip to Nan & Chiang Mai! 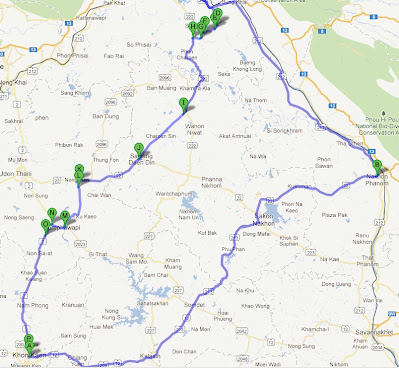