Along the Mekong in Tha Khek, South Laos 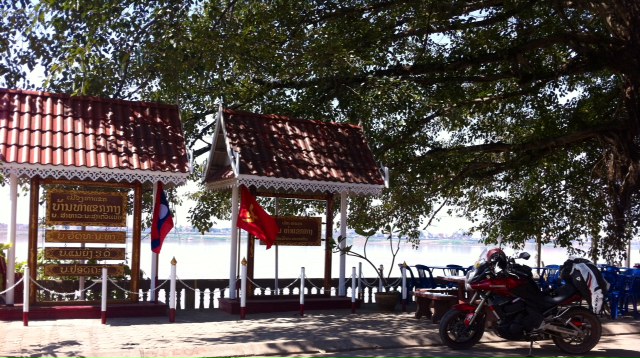 Early afternoon we arrived at the riverside of the small city of Tha Khek along the mighty Mekong river. It is one of this old places in Laos where you can still see the influence of the French colonisation with old colonial style houses and a French style city square. Along the boulevard are small restaurants and some pubs. We loved it! As did also all the tourists that we did see in Ban Kong Lor who did arrive in the afternoon by bus. Hey, you also here again?

We had an failed dinner at the restaurant of Inhteria Hotel, the pizza's are really totally tasteless. For the rest a nice place to sit, relax and drink something. Later in the evening we had an snack & drink at one of the small places along the river. At almost the end of the riverside is an nice restaurant and in the river is an floating disco.

Hotels in Tha Khek
There are actually many hotels and guesthouses in Tha Khek but here are 3 ...
Places to eat in Tha Khek
Inthiria Restautant (french kitchen, but pizza's are tasteless) but along the riverside are many restaurants

How to get there
From Nakhon Phanom over the "Thai-Lao Friendship bridge 3". Lao Visa on arrival available. Be aware when entering again Thailand without a visa you will get an 15-day entry stamp.
Labels : Laos MekongRiver ThaKhek Traveling
Location : Thakhèk, Laos