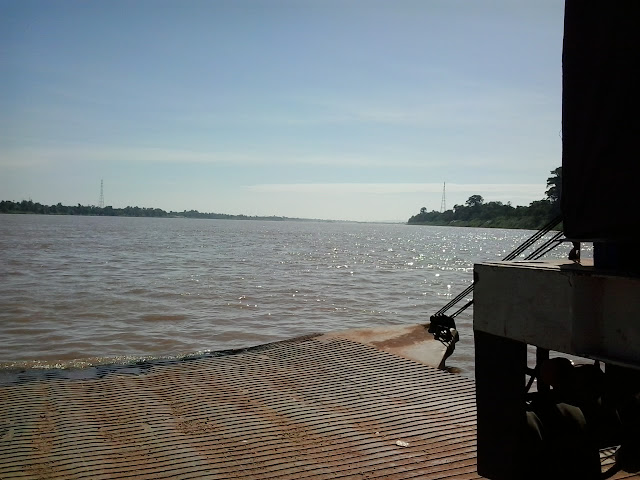 Following is a Motorbike Trip Report from 2012 riding my Kawasaki Versys 650 from Khon Kaen to Central Laos and back to Khon Kaen again. For more motorbike trip reports in Thailand see MOTORBIKE TRIP REPORTS. If you want to travel in Laos and need information or help about your transport, itinerary, tours or accommodation then send me a email at Contact @ Traveling2Thailand.
Well, actually it was an "Due health reasons aborted Laos & Cambodia trip", but next month we will continue the southern Laos part and hopefully also Cambodia. We started of in Khon Kaen and made a 322 km ride to Bung Kan via Udon Thani and Sawang Deang Din and we did stay one night in Bung Khan. It is a nice small town with in the evening some restaurants along the riverside of the Mekong River. We did stay in the simple "Mae Nam" Hotel right at the riverside. About 100 meter further is a good coffee-shop and nearby an "Steak Box" restaurant serving Western food.
From Bung Kan you can take the ferry to Paksan in Laos. The ferry is about 10 km west of the city. It all goes very easy and relax. There is an immigration officer to take care of your passport and an English speaking lady to take care the paperwork for the motorbikes. And of course an custom officer. On the Thai side it took us about 15min, then we did put the bikes on the ferry. The road leading to the ferry has good tarmac and getting on the ferry is easy.  Going to the other side took about 20 min. On the Lao side the road from the ferry is a bit shitty, put-holed cement road that goes about 10 meter higher. And with a very slow driving big truck in front of you this ain't fun. After about 100 meter there is the immigration check-point. On the left side there is the small office of the insurance you have to buy. The all paper-work, immigration and buying insurance did take about 45min. So all together it takes about 90min. At the Lao side was a sign "Visa On Arrival for Foreigners", what would indicate that you can get and VOA. We did not need that as we did get one already at the Lao Consulate in Khon Kaen. Of course we had to pay some tea-money, both on the Thai side and the Lao side.


After exiting the border-control we turned right on route 13. After about 1 km there is a bank on your left hand, so if you want to change some money this is the place to do. Of course there are also ATM's. When riding a little bit further you do pass a small bridge and just after that bridge we took a right turn in direction of the Mekong river. At about 50 meter before entering the road along the Mekong river there is an nice restaurant on your right hand side. The restaurant is along another small river. A simple fried rice was fine, while the all restaurant filled up with people from a nearby school and government building ... all drinking Lao beer and whiskey. After our snack we continued follow route 13 in direction of Pak Kading and in the afternoon we arrived at Vieng Kham. The road of route 13 between Paksan and Vieng Kham is an good tarmac road and easy to ride with our tour motorbikes (both Kawasaki Versys). 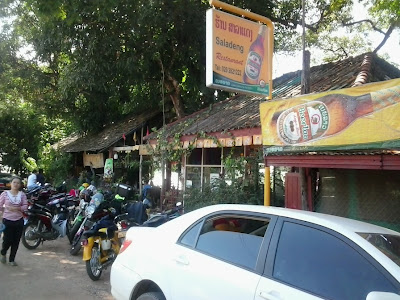 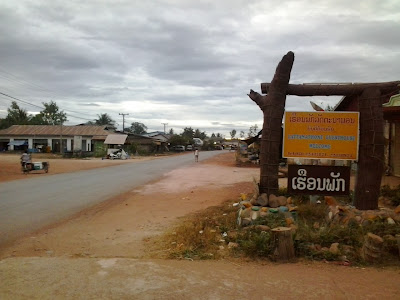 Vieng Kham is where route 13 meets route 8 (to Vietnam). We decided that it was too late to ride to nowhere and checked in at typically "along the road" hotel opposite of the bus station. About 50 meter before it is another hotel and about 150 meter before it is a next months to open brand new hotel. The next morning we took route 8 in direction of Ban Nam Sanam. After about 20 km route 8 starts to go into a beautiful limestone mountain landscape and the road did go steep up to about 450 meter high. At the hight of the mountain is a viewpoint with beautiful view over the karsten mountain range. From there the roads leads you in 8 km down to the valley of Nam Sanam where you see and sign "Kong Lor Cave". From here it is another 40 km to reach the entrance to the Kong Lor Cave. As we left early in the morning we did arrive at about 10am at the cave. The cave tour takes about 3 hrs and after that we did ride back about 1 km to check in at "Chantha House & Restaurant" where we would stay for 1 night. 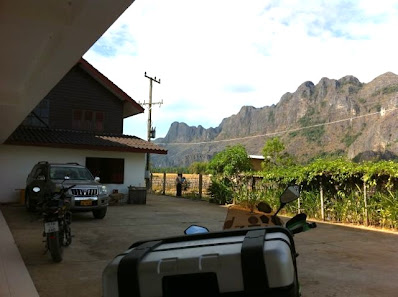 The next morning we left early to ride back to Vieng Kham and continue route 13 in direction of Tha Khek. This part of route 13 has many bad sections and many side-cuts for road-work. So it was mud, dust and gravel many times. Sometimes so much dust I could not see the car driving in front of me at a distance of 10 meter! But despite that I was starting to feel a bit sick already we did mange to arrive in Tha Khek save & sound, but a bit dirty! 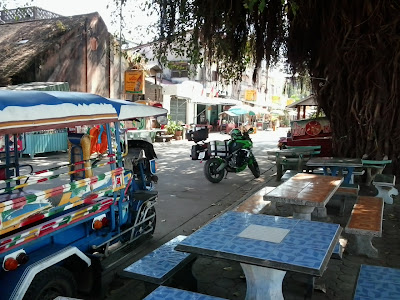 Tha Khek is a nice old French colonial city .... village along the Mekong river, opposite of Nakhon Phanom where also is the "Thai-Lao Friendship bridge 3". In the village you still see the reminders of the French colonisation by old colonial style houses and a beautiful french village square. We did stay for 1 night at "Mekong River Hotel". Along the river are some small restaurants and pubs. Tha Thek seems to be popular by backpackers and we liked it actually very much. Maybe we should have stayed a second night?

But due to the fact that I was still feeling a bit sick we decided to ride to Savanakeht the next day. This part of route 13 is boring, easy riding and if you are in a hurry you can do it in 1hr. But be aware Lao riding style of other people using the road! Like that idiot that came on his scooter from left to right to make a u-turn and cross the road again from right to left while I was approaching at about 100 km/h. Luckily I thought already he would do something weird. 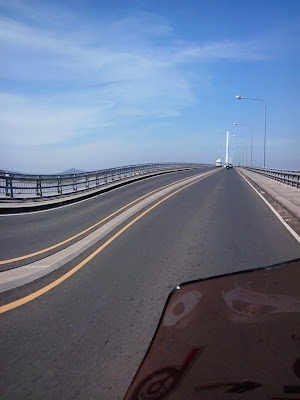 So we arrived early in Savanakhet and checked in at "Dao Savan Resort & Spa", I think the most expensive place to stay in Savanakhet. Although the hotel is along the riverfront, it is a bit out of the town side. And no free shuttle service to the city! And breakfast was really more as disappointing. And we walked a bit in the "historic downtown of Savanakhet" and had lunch at "Boon Cafe".

As I was still sick we decided to abort our idea of going to the south of Laos & Cambodia and the next day after a disappointing breakfast we crossed the bridge. At first there was a bit of "cannot with motorbike" but with some financial motivation it was possible of course. The all paperwork on Lao & Thai side took us about 45 min. The customs people here do very well know that we cannot have a passport for the motorbike.
So we entered Thailand again and did ride to Mukdahan for a refreshment drink. There realising that it was already almost 11:00 and bloody hot we decided to stay for 1 night in Mukdahan at "River front Hotel". We went to a country-western bar right in front of the "River View Hotel" what seems to be a place for bikers to meet each other. The owner is a friend Thai man, who just bought himself a brand new Versys. Nice place to have a drink and meet some people.

The next day it was an easy and  boring road back to Khon Kaen via Kalasin over route 12. There are not much places to stop along the way, but somewhere between Mukdahan and Somdet they are building a new PTT gasoline station with Amazon and 7/11. A few km after Somdet is a gasoline station with restaurants, 7/11 and Amazon. 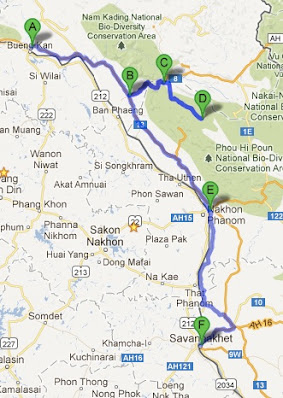