Following is a motorbike trip report from August 2016, riding my Kawasaki Versys 650 from Khon Kaen to Lampang, Chiang Mai and via the Thai-Burmese border to Chiang Rai. And then via the Thai-Lao border to Dan Sai, Loei and back of course as I am living in Khon Kaen. A 7 day trip of in total 2.170 km, covering the area of the old Lanna Kingdom, Burmese settlements, former Chinese KMT strong-holds and beautiful national parks. A wide variety of culture and landscape. Most roads were in good condition, some roads were in bad condition and some stretches were not roads at all. Culture-wise I did find the area north of Chiang Dao the most interesting, a place to come back! For more motorbike trip reports see Motorbike Trip Reports.

Day 1 : From Khon Kaen to Lampang

Total of 530 km. The  beginning of my tours is almost always the same, first via route 12 to Chumpae and Lomsok and then a bit in direction of Phitsanulok. Then half way I took a right turn to route 2013 in direction of Nakhon Thai. This as I do not like to ride all highways and it is an beautiful country side route with good roads and not much traffic. Then from Nakhon Thai via route 1143 to Uttaradit from where I took route 11 to Lampang. Route 11 is for the most part a divided highway and in very good condition. Lampang is still the little sleeping provincial town, although there is now also an Central Plaza shopping mall. In the evening I had dinner at "Riverside" restaurant. And I did stay overnight at "Baan Chiang Rai", a new guesthouse/hotel in the city centre of Lampang.

Day 2 : From Lampang To Chiang Mai

Total of 160 km. The next day I did wake-up early and left Lampang in northern direction via route 1157 in direction of "Chae Son" national park. Actually I did not really took route 1157, but the small country side roads along route 1157. An amazing beautiful country side with rice paddies, Lanna style temples and simple village life. Forgotten by most tourists and the real Thailand. Then I took route 1252 thru the beautiful mountains of Chae Son National Park. Again an amazing beautiful (and good) road thru a beautiful landscape of north Thailand. Half way I stopped and did sit for a moment on a few big stones along the road. All alone ... just the sound of wind and birds. From route 1152 I did ride to route 118 that goes straight to Chiang Mai. Here I did stay overnight at "Wangburapa Grand Hotel" along the moat of the old city. It has private parking and a swimming pool. 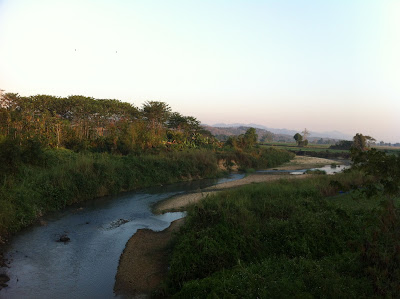 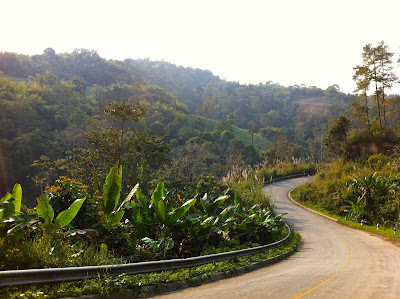 Total of 280 km. Again I left very early in the morning and did exit Chiang Mai via route 107 to Chiang Dao. Just after Chiang Dao I took a left turn for route 1178 and at Mae Jo I took a left for route 1322 to ride all the way to the Burmese border at Lak Teng. Here there the only way to continue is going back to Chong and take route 1178 to Muang Na and Lin Luang. This would become a loooong ride as a big part is more or less a very wide dirt-trail with stones and big gravel. This was NOT fun, riding alone with a Kawasaki Versys and not knowing how worse it could become. It started with a 6 a 8km stretch of good road, then it turned into a 25km stretch of dirt road, then again some 10km good road and then again some very bad road parts. Of course once & while locals on their old Honda Wave fly by like they are riding on a beautiful asphalt road. At Lin Luang I went again to the Burmese border at at Kiew Pha Wok. Border closed! Again an u-turn and back to Arunathai to take route 1340 & 1249 to Doi Ang Khang. Here I did stay overnight at "Ang Khang Villa". 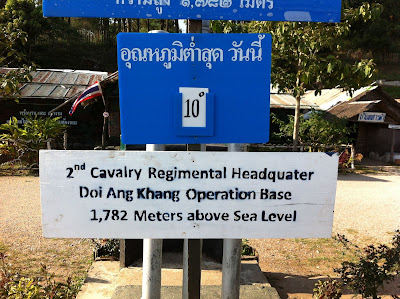 Total of 255 km. I did wake-up very early, even if it was only because someone thought it was a good idea at 5 in the morning to fire a 5000-fire-cracker next to my room! So I left in the early morning fog and did ride back to the view-point where I was the day before. Many people joined there to watch the sunrise. Then I did ride back via route 1249 to route 107 & 1089 to ride in direction of Doi Mae Salong (a former Chinese KMT strong-hold). Halfway I passed Tha Ton and had breakfast at "Tha Ton Hill Resort" with a great view over the valley of Tha Ton. At Tha Ton you cross the Mae Nam Kok that leads to Chiang Rai and it is still a famous point to take a small boat to travel to Chiang Rai by Kok boat. I followed route 107 until the left turn to Doi Mae Salong and followed route 1234. Wow, Mae Salong has changed in the past years, there is even a 7/11 now! Of course still all the signs are in Chinese here. I can still remember the old Chinese man patrolling at night with his AK47! At Sam Yek I took a left turn to Thoed Thai via route 3051 and took again a left turn to Hua Mae Kham. This is an area that sticks out into Burma and there are many different hill-tribe people living together. Too bad the roads became to steep and not signed for me to ride all the way up to the border area. But it is an amazing beautiful area, with all villages build on steep mountain slopes. So I returned back to route 3051 and then to route 1130 to join at route 1 to ride straight to Chiang Rai, where I did stay overnight at "Diamond Park Hotel" (see Hotel Reviews).

Total of 275 km. Again at dawn I left Chiang Rai via route 1233, 1173, 1152 to Payamenrai and Ta to go a little bit north via route 1020. This to take an un-numberd route between route 1020 and route 1155 as short-cut over Doi Phaya. This route is not on all maps and even my Garmin GPS thinks it is an trail, but it is an good road that goes right thru an beautiful mountains area. With amazing steep and twisty roads. I loved it! Too bad that at the most spectacular moments the roads were too steep to stop and take an photo. After the short-cut I took a left turn on route 1155 in direction Pang Hat to take route 1093 south again to pass Rom Fah Siam and Phu Chi Fah. I kept following route 1093 in direction of Chiang Kham. I had the idea to stay there overnight. But it did not look nice and it was still early in the afternoon so I did ride on, and followed route 1148 to Nan. Route 1148 is a very twisty road passing a few high mountain area's, so it was about 16:30 when I arrived at Song Kwae. And as it was too late to still check-out the local Lao-Thai border area I decided to stay overnight here. Together with 2 Aussies on their bicycle we did find an very simple guesthouse. And we had dinner at the local street restaurant. 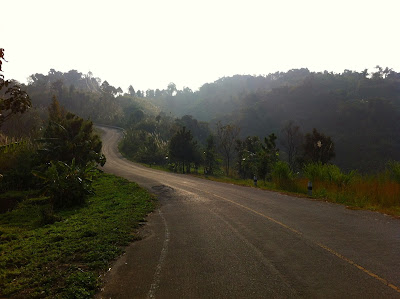 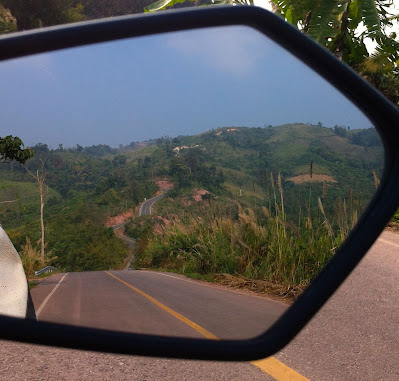 Total of 400 km. So I did wake-up very early and left first to check-out the locale Lao-Thai border area, just 20 km north of Song Kwae. This road goes right into the mountains and with the morning fog hanging in the valley it was an very beautiful trip. But a bit foggy on the visor when heading down. Where on my GPS the road did end, actually a all new road did start. And I followed the new road .... wrong I should have gone to the right there. So back again and take the correct turn to the border-market area. Then the road asphalt did disappear and the road turned into a very wide trail with gravel and stones. And after a few KM I decided that this was not a good road for a 210kg bike and an rider alone in the middle of nowhere. So I made an u-turn and did ride back to route 1148. And just after Song Kwae there is an left turn to Chiang Klang via route 1097 from where I followed route 1080 to Chalerm Prakiat and the international Thai-Lao border of Huai Khon. This must be the oil-pipeline to Laos as the I passed dozens of oil-truck heading to the border. From the border I followed route 1080 again to take a left turn to Nam Ri Phattana via route 1307. The road did go from good to worse and almost gone .... thru the village I followed and narrow concrete road thru the beautiful valley what was long time before and communist strong-hold. A beautiful ride and I saw the small road going into the mountains and to the border of Laos. But the road became to steep so at an safe point I made an u-turn to ride back to route 1080 again (or is 1081?) in direction of Bo Klua. Here I did stay overnight at "Bo Klua Fa Sai Resort". 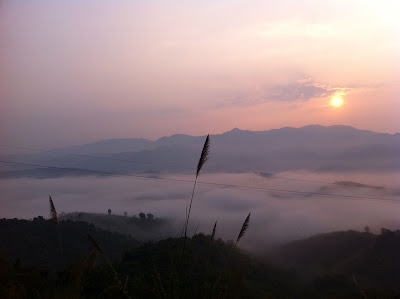 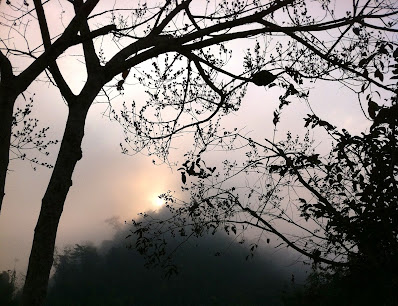 Again at dawn and fog I started to ride following route 1081 in direction of Santisuk and took route 1225 to Mae Charim. A beautiful ride in the foggy mountains. Beautiful nature but not much culture anymore. And then via some short-cuts I did ride to Wang Sa and then route 1026 to Na Noi. Then following route 1083 and 1123 to route 1047 and route 1268 to Ban Khok and Na Heao. And then route 2113 to Dan Sai, where I did stay overnight at "Phu Na Come Resort". All good twisty roads and with beautiful view. Only between Na Heao and Dan Sai was a stretch of 5 km road construction, where some dude tried to push me of the road.

Total of 270 km. The end of the trips are also always the same, from Dan Sai via route 203 to Lom Sak and then via route 12 to Chumpae and then Khon Kaen. Of course again passing "race circuit Nam Nao". As usual I made a drink stop at the PTT gasoline station just before Chumpae. It has been long riding days with all the detours I made and with the many very bad roads that I did encounter. Actually a bit too much and I am happy to be back home again. Home sweet home!