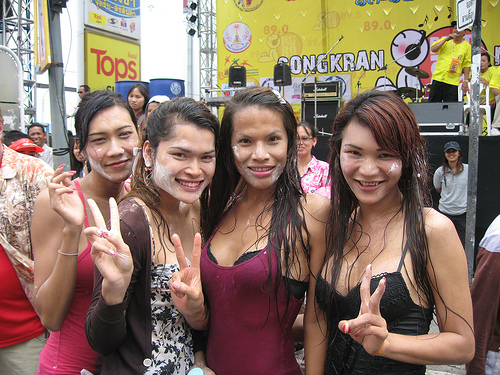 April 2015 and it is that time of the year again .... Thai New Year (Songkran) what is becoming only famous for throwing water at each other. Something that originated from the Buddhist culture of "Nam Op Thai", pouring a little bit water over each other and washing the hands of the elderly to ask them for their blessing. Songkran is celebrated at 13 April, while 14 April is National Family Day and 15 April is National Elderly Day. The "Nam Op Thai" has changed into a huge water party and Songkran in Phuket, Bangkok, Pattaya and Chiang Mai has become world (in)famous. But Songkran is celebrated all over Thailand. And also in Laos and Cambodia.

And also in Khon Kaen, and it seems the Songkran party is becoming bigger every year here in Khon Kaen. As Khon Kaen is famous for its "Dok Khun Siang" tree (the trees with the yellow flowers) that are in full blossom with Songkran there is also an "Dok Khun Siang Kaen Festival" with ox-car procession with flowers and of course beauty pageants. In Khon Kaen the main drag of the Songkran party with people, cars, motorbikes and a lot of water will be Thanon Lao Nadi going to Bung Kaen Nakorn. Then leading back to Sri Chan road and back to Thanon Lao Nadi via Thanon Na Muang. A part of Sri Chan road will be closed of and temporarily be renamed to "Soi Khao Niao" (Sticky Rice Road).

The water throwing seems to be in good control in Khon Kaen, during day-time in the city centre nobody is safe (hide anything that you do not want to get wet) but early morning or evening it is pretty safe (even in the city centre). Outside the city centre you should be safe (dry) all day, although you could be surprised by some kids around the corner. Also be aware of the fact that it seems that 50% of the Thai are traveling to their home village or going for an holiday. A lot of people will take a few days extra and they will have super-long-weekend. So there will be a lot of traffic on the roads. During parties people tend to drink a lot a alcohol and most of them do not see this as an problem when driving or riding. So this time of the year is the most deathliest week as in deaths of traffic accidents. Be careful!
LABELS : Festivals Isaan Khon Kaen province Khon-Kaen Songkran Thailand Travel-Tips
LOCATION : Khon Kaen, Mueang Khon Kaen District, Khon Kaen 40000, Thailand