A few days in Ban Lung in Ratanakiri, Cambodia

In 2013 I was staying a few days in Ban Lung, the capital city of the province Ratanakiri in the most North-East of Cambodia, along the Lao and Vietnamese border. Jared from"Cambodia Alive" captured it best with

The region has been known for trekking for a while now, though some of the most common trekking locations are not doing well against their competition of logging and commercial agricultural interests. Nonetheless the wilderness still holds surprises.

There is something strange about Ban Lung, actually exactly what I thought. It is the originally first trading post after the Vietnamese border. And that creates a special kind of town. Restaurants and guesthouses / hotels look like they had their prime time a few years ago and maybe are even closed. But they are open, but just not look like it. Well actually some hotels & restaurants were closed like Everest and a hotel near Yaklom lake. Some other places moved to new location like DutchCo.

Another thing that I did notice that there are a lot of Karaoke bars (KTV) all over town. Some are new and look like expensive places like Galaxy, others look like a whorehouses in a ghetto. A pleasant surprise was the area where they make wooden artefact, still by hand. Too bad that they all make the same that you will see in wood-craft shops all over Asia. A shame because the work itself is real art. The area is behind market.

Getting to Ban Luang there is easy but forget the airport what is just strip of gravel. From Phnom Penh (and Kratie) busses, mini-van's and mini-busses are going. Most of the road to Ban Lung is in good condition (at May 2013) but the part between Kratie and the intersection to Ban Lung (about 10 km before Stung Treng) is in bad condition and will slow down the trip. 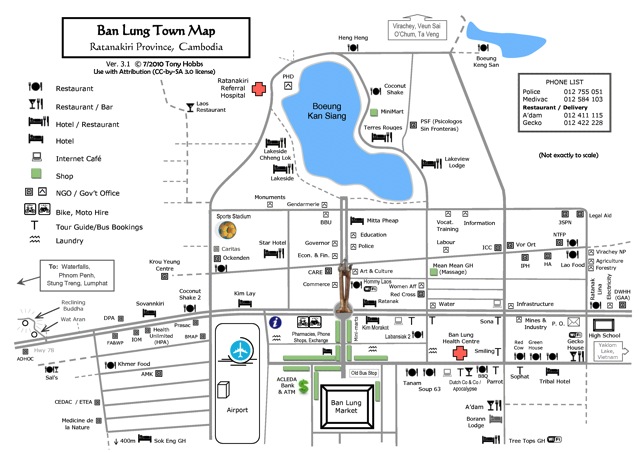 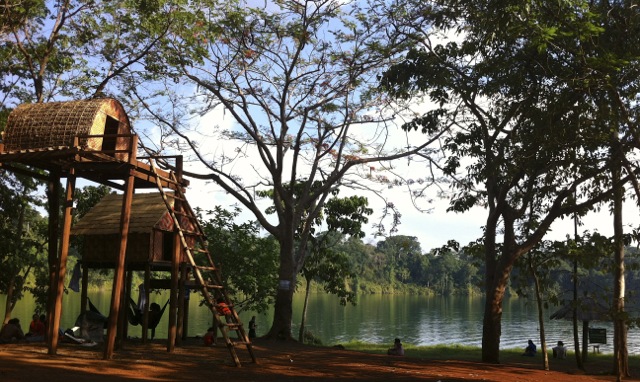 Getting around in Ban Lung is also easy, there are motorbike-taxi's everywhere and even some Tuk-Tuk's. But renting your own motorbike makes it much easier and gives you the opportunity to explorer the area of all Ban Lung and further. Opposite "Paradise Restaurant" are some shops renting out motorbikes, even also some 250cc off-road-bikes. Check quality as you do not want to be with an broken motorbike in the middle of nowhere.

There are many hotels & guesthouse in Ban Lung, the centre of town is around the market. There are some guesthouses but the area is noisy and not nice to stay. Around the "Kan Siang" lake are some hotels and restaurants like Colonial Palace (brand new), Terres Rouges Lodges (top of the bill). Near the Yaklon lake (5km outside the city) are also a few hotels like Ratanak Resort (stunning swimming pool). Be aware of the fact that quit a few guesthouses are actually places for Cambodian style fun night out.

Along the street called "Pub street" (leading east from the market) are some restaurants like Paradise, Tribal and Gecko (nice atmosphere and good food). Next to "Borran Lodge" and "Adam Restaurant" is an small restaurant just down from the new location of DutchCo. This small restaurant is managed by Dave and his wife and they serve a very good "Apple pancake with honey". 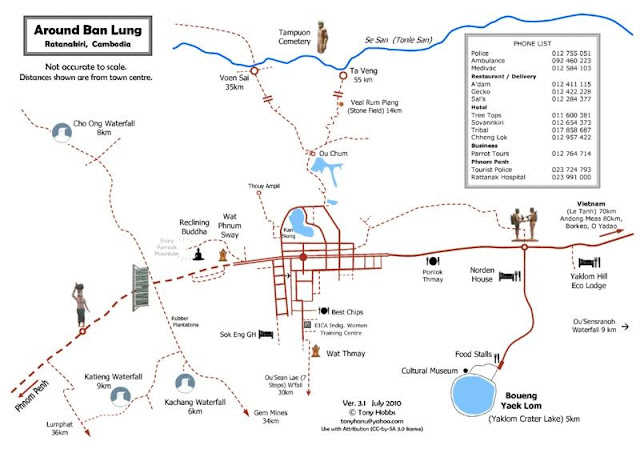