Almost everything about Udon Thani 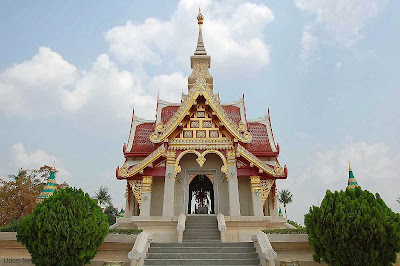 Udon Thani is both a province and a modern provincial city that is only 50 km from the border of Laos at Nong Khai. It is not a place with much tourist attractions, but home to quit a few westerner retirees and expats. And the nearest point of westernization for people living in Vientiane in Laos.

How to get to/from Udon Thani?
Bus : There are busses to/from all big cities in Thailand. There is also a direct bus from to Vientiane (Laos). Nakhon Chai Air has his own bus-stations, just 2 km south of the main bus-station.

Car : The roads to/from Udon Thani are good and you could drive from/to Bangkok in about 6 to 7 hours.

Train : You can take the train via the train-line Bangkok-Nong Khai. For information about the train see SRT

Mini-Van : Although you could also travel by mini-van, due to the very bad safety records I would not recommend to use mini-van's for long trips.

Where to stay?
There are many hotels & guesthouse in Udon Thani. I always stay somewhere near Central Plaza.

How to get around?
Where to eat?
There are many restaurants, a bit spread over town. The most of course are Thai but there are also some good western oriented restaurants. The best area's to look are near Central Plaza or near UD-town.

What to do?
There is actually not much real tourist attraction in Udon Thani. But a walk along Nong Sim lake and park in the early morning or later afternoon gives you a good look on the normal Thai life in Udon Thani. And in the evening visit UD-Town Night market.

Where is the nightlife?
The most nightlife is near the train-station and the street in front of Central Plaza and Centara Hotel. The same area where also is UD Town, an evening market. The nightlife here is more western oriented with beer bars and small pubs. Thai oriented nightlife is spread all over Udon Thani city.

Is there more information?
Have a look at my postings about Expat Information Udon Thani Or have a look at Asia Web
And Thai Sabai And Udon News
Labels : Isaan Thailand Travel-Tips Udon Thani province Udon-Thani
Location : Udon Thani, Thailand