on July 22, 2022
Welcome to Bangkok, the oriental city that does not sleep. Bangkok is the capital city of Thailand but as Bangkok Metropolitan Area (BMA) also a kind of province of Thailand. There has been many things written about Bangkok so I will leave the details to Wikipedia and others. Following I will write about my own experience about Bangkok city since the first time in 1985. Bangkok is actually the river delta of the Chao Phraya River and long time ago Bangkok was know as the "Venice of Asia", but nowadays most canals (klongs) are closed and turned into roads. Bangkok is a huge city with about 10 to 12 million people, with some super modern area's as Sukhumvit road and Silom road but also traditional China Town and still a kind of Thai village neighbourhoods. If you like cities you could stay here for weeks or even months to explore Bangkok. If you are planning to travel in Thailand and need help with planning then send me a email at The Little Elephant Traveling in Thailand.
Read more about other destinations at DESTINATION TRAVEL GUIDES. 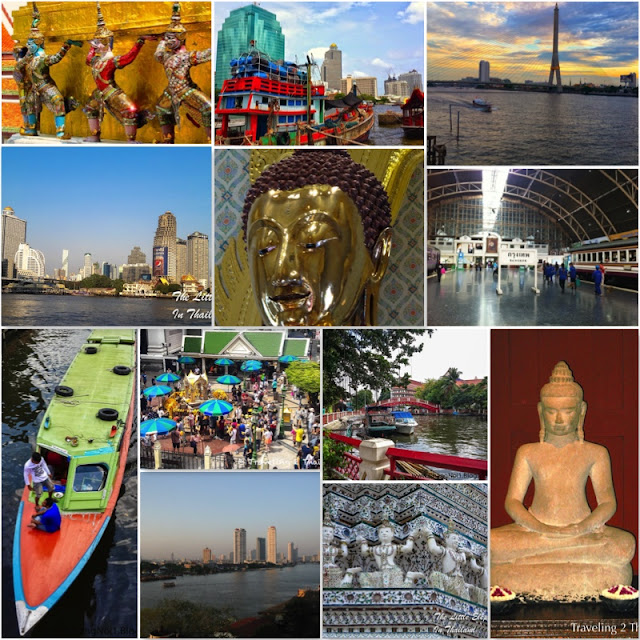 The name of Bangkok

The official Thai name of Bangok is :

But never mind as Thai people will call it Krunghthep and international it is called Bangkok (what comes from a once small village Ban Kok). Bangkok the city of angels.

One night in Bangkok and the world's your oyster
The bars are temples but their pearls ain't free
You'll find a god in every golden cloister
And if you're lucky, then the god's a she
I can feel an angel sliding up to me

How to get to/from Bangkok?

There are  3 main bus-stations in Bangkok :
There are busses going to all major cities in Thailand and even to Laos, Cambodia and Malaysia.

By Car or Motorbike

All major highways to/from Bangkok are good to very good and you can drive or ride to any major city in Thailand and even to Laos, Cambodia or Malaysia. At both airports of Bangkok are good international car-rental companies and self-driving is easy and safe.

How to get around in Bangkok?

Where to stay in Bangkok?


Where to eat in Bangkok?

For more travel tips about Bangkok have a look at Travel Tips Bangkok.

Where is the nightlife?

Thailand and especially Bangkok is famous (or should I say infamous) for nightlife. Of course the so infamous nightlife is at Patpong (Silom road), Nana Plaza (Sukhumvit road Soi 4) and Soi Cowboy (Sukhumvit road Soi 23). Around this area's there is of course a development of other nightlife with pub's, restaurants and disco's. As of Sukhumvit road that is mostly the upper-part, lets say from Soi 2 to Soi 45. But Thai nightlife scene is actually everywhere like at RCA, Ari, Thong Lor, Ekmai and even Klong Toey.

Looking for shops, markets or other things in Bangkok? Read my postings at All about Bangkok