Making a bicycle trip in Thailand, Laos or Cambodia 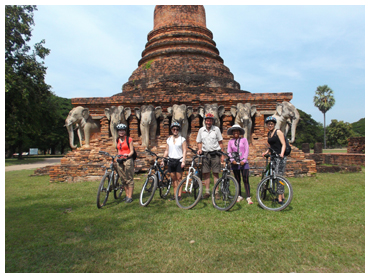 Location :  Rama 3 road, Bangkok
Web-site  : Recreational Bangkok Biking.
A Dutch managed company that is already doing bicycle trips for a long time. They do tours in Bangkok and have partners in Chiang Mai, Hua Hin and Pattaya. I have never joined them so I can not tell much about it.

Location : Sukhumvit Soi 26, Bangkok
Web-site : ABC Biking Bangkok
Also an original Dutch managed company doing tours in Bangkok. I have never joined them so I can not tell much about it.

Location : River City, Bangkok
Web-site : Co van Kessel Bangkok Tours.
A company originally setup by the late Co van Kessel from the Netherlands. Now run from "River City" in Bangkok by a kind of family of Co (in the Thai way of speaking). They do tours in down-town China Town and actually almost all over Bangkok. I joined them a few times and I love their tours.

Location : On the outskirts of (new) Sukhothai
Web-site : Sukhothai Bicycle Tour
A family company by Jib and Miouw, with locale guides to show you the historical city of Sukhothai but also the authentic upcountry life of Thailand. Jib and Miouw both speak Thai and English. And they are doing great tours along the rice-fields and historical park of Sukhothai. Although I have never joined them in a tour, I know them already more as 10 years and I am sure they make great tours.

Location : On the outskirts of (new) Sukhothai
Web-site : Cycling Sukhothai Tours
By Ronny and Mem. Ronny is a long-term resident of Sukhothai and many moons ago he married with Mem from Sukhothai. They did work both on the tourist sector and now they are running their own bicycle company. Something they both do with their heart. Ronny speaks Thai, Dutch, French and English. Mem speaks Thai and English. A long time ago I did join Ronny on one of his field-work trips and it was a great tour along the country-side of Sukhothai and the historical park of Sukhothai.

Location : HQ in Vientiane, Laos but they have 6 other offices in Laos.
Web-site :Green Discovery Laos
They do bicycle tours in Vientiane but also in almost all their other destination area's of Laos.

Location : Vientiane, Laos
Web-site :Vientiane Bicycle
Originally set-up by a Dutch lady, but I am not sure if this company is still active.

Location : Thailand (Bangkok and Chiang Mai), Cambodia (Phnom Penh and Siem Reap), Laos (Vientiane and Luang Prabang)
Web-site : Grasshopper Adventures.
An Australian managed company that organizes small quality bicycle trips. They also do rent bicycles so you can just go your own way. I rented bicycles from them in Phnom Penh. Good taken care of bicycles, but not really cheap.