Almost everything about Ubon Ratchathani 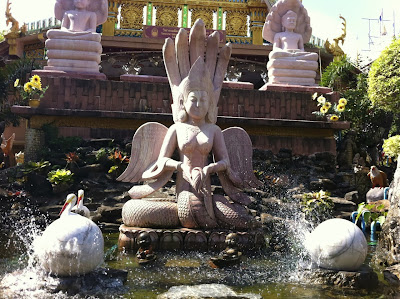 Ubon Ratchathani, the Lotus Blossom,  is Thailand's most eastern big city and the capital city of the province Ubon Ratchathani. It is a modern city, grown big during the Vietnam-war area as the USA air-force used the airport for campaigns in Vietnam. The city is used as gate-way to Southern Laos. The city is famous for it's yearly candle festival.

How to get to/from Ubon Ratchathani?
Air : For domestic flights only from/to Bangkok by Thai Airways, Air Asia and Nok Air.
Thai Airways is pretending to fly from Ubon to anywhere in Thailand, but as far as I understand all that flights have a stop-over in Bangkok.

Road : Main roads all over Thailand are good & safe, driving to Bangkok would take you about 6 to 7 hours.

Train : You can take the train from Bangkok to the end-station at Ubon Ratchathani. With the night train it will take you about 12 hours. Train station is just outside the city on the other side of the river.

How to get around?
Where to stay?
There are some guesthouse near the train-station (south of the city) or along the riverside area or in the area of the airport.

Where to eat?
Along the riverside are some nice restaurant, as well around the area of the airport. But as in most modern Thai cities restaurants and pubs are actually spread all over the city. I will have to come back soon to check that out better.

What to do?
The city itself has actually not much tourist attractions, as to be used as a starting point to travel to Laos. Just enjoy local city life and visit the riverside market or the beach at the Moon River. And  walk in the late afternoon / evening at Tung Sri Muang Park (city park).

What to do nearby?
* Visit "Phreah Vihar" temple (if there is no war going on)
* Visit the "Two colored river" (where the Moon River meets the Mekong River)

Is there more information?

A personal non-commercial travel blog as inspiration for traveling & motorbike riding in Thailand. Made just for the sheer love of traveling and sharing experience about traveling in South-East Asia. Enjoy!

A small Mekong River trip in Laos and Thailand

Reposting from 2017. Following is a long posting with photo's of a tour along the Mekong River in Laos and Thailand. Our journey started and ended in Khon Kaen (Thailand). First two days exploring Khon Kaen City and nearby area like Sight seeing at Phu Hin Chan Si. After that we did drive to Nong Khai (Thailand) where we would cross the Thai-Lao Friendship Bridge to Vientiane. It is easy & straight forward but is takes some time. We had to apply for a Lao Visa (35us$) and arrange the temporarily export / import of our car. So we arrived in the afternoon at Mandala Boutique Hotel  (where I did stay before). We did stay 3 nights in Vientiane and would spend New Year here. The evenings we did spend at the boulevard along the Mekong River. The new park along the Mekong River at the east-side (or is that south side?) is a great place to relax in the late afternoon and then just stroll your way up and enjoy a beautiful sunset. Then just after sunset settle down at the small res