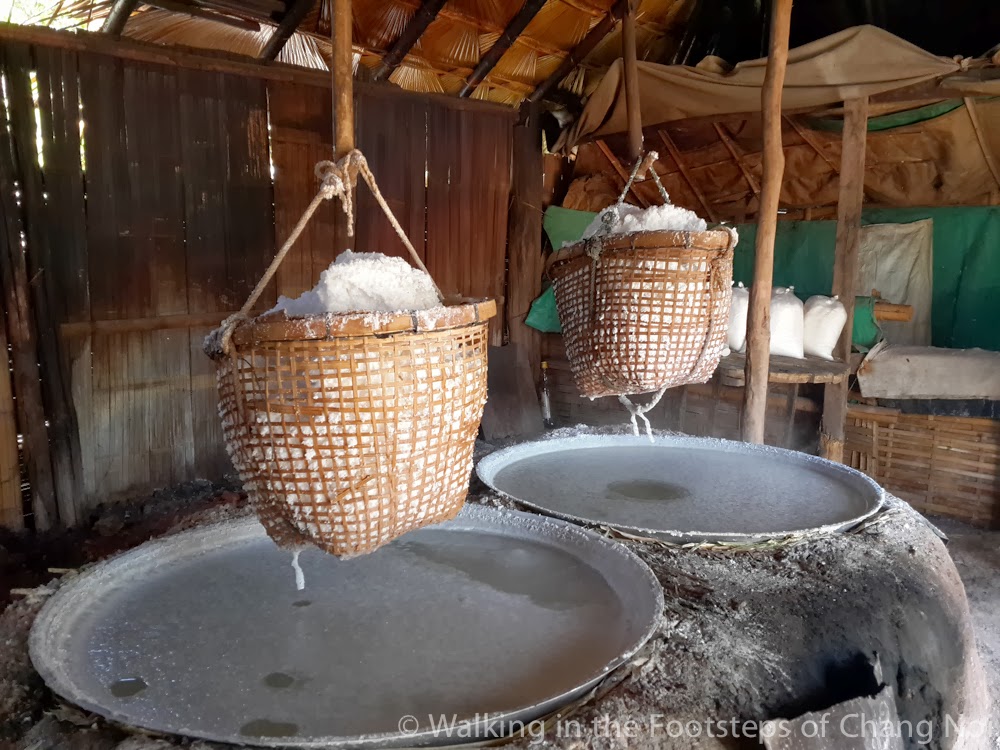 Always wanted to know where salt came from in the ancient days? Then travel to Bo Klua in Nan province, a small village actually named Ban Bo Luang in the valley of the Maern River in the remote  mountains of Doi Phu Kha. Mind you Ban Bo Luang is a 90 km trip north of Nan town and will lead over the mountain ridges with stunning views. The old Nan Kingdom was rich because of 2 things, the famous silverware from the Hmong and the famous salt from Bo Klua. The name of the latter translates to "the area of salt". At Ban Bo Luang you can still see 2 old salt pits (Sin Thao) that are still functioning, but the salt produced here is now solely sold as souvenir. A bit north of Ban Bo Luang are actually a few more no active ancient salt pits in the forest of Doi Phu Kha.
The most visited Ancient Salt Pit (Sin Thao) in Ban Bo Luang is along the Marn River and surrounded by souvenir shops & coffee shops. About 100m further, near the old post office, is the second Ancient Salt Pit. At both Salt Pits you can see how the salt is produced.
For more information about Nan province see Destination Travel Guide Nan.

When to go to the Ancient Salt Pits?

All year, but be aware that during Khao Pan Sa (when monks do not leave the temple) the workshops around the Salt Pits are closed for 3 months (July / August / September). This is to protect the village from bad luck. This means that the Salt Pit is not used and you can not see how salt is produced. But This Is Thailand so this rule could change also any day.

The Ancient Salt Pits are in the village Ban Bo Luang in Bo Klua district, what is about 90 km north of Nan town in a valley of the mountains of Doi Phu Kha.


How to get to the Ancient Salt Pits?

By public transport first to Pua, from there take a Songtheauw to Bo Klua. But Bo Klua is best to be visited with your own transport by car or motorbike. From Nan just follow route 101 to Pua and in Pua follow the signs for Doi Phu Kha National Park via route 1256. Once on route 1256 you will see signs for Bo Klua. Be aware that the last 40 km route 1256 will go into the mountains with some steep & curvy roads leading all the way up to 1715m above sea-level. Also be aware that during or just after the raining season the road could be damaged by land-slides.