A Search & Rescue Mission in the Jungle 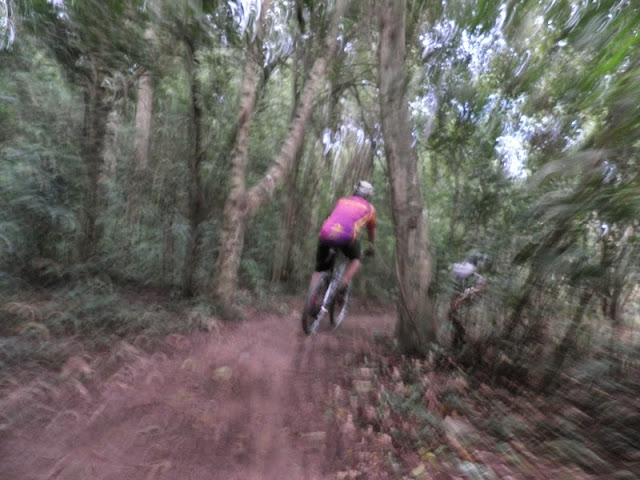 Photo above is for illustration only and it is not my photo, as reference to a mountainbike trip I once made in the jungle forest in Thailand. And this is not about the bicycling itself but about the mistakes we made, so maybe you can prevent making the same mistakes as we did. We made this mistakes while going for a mountainbike trip but you could make this mistakes while walking, off-road motorbike riding or any intensive exercise in a country with a hot & humid climate as Thailand.

We did choose the difficult and longer trail of 12 km instead of the easy and shorter trail of 8 km. Mind you we had never ride a mountainbike trail in the jungle before. Recommendation : Do not overestimate yourself!

The trail of course had not good signage and soon we were not sure if we were still on the trail. But we did choose to ignore that and later even thought "We are almost there". At a certain moment I was very tired and thirsty. But I choose to ignore that and did not want to call in help. Recommendation : When you are extreme tired & thirsty stop making decisions and call for help!

We were just bicycling, like we used to do in our home country. Protection? No! We did just race down steep trails with trees and rocks along the trail. And when very steep we did walk. Recommendation : Depending on what you are doing use the right protection!

This jungle forest was not big and within just a 1 km from houses and a village, so how can you get lost there? Well very easy and you are even much smaller so not easy to find if you are down & out. Recommendation : Do not overestimate how easy the terrain is!

So at 16:00 we started to ride out mountain bikes. But just after 5 km my water was gone. And a few km further we did not know if we were still on the trail (we should have gone back at that moment). I was getting more tired and needed to rest more and more, something that would slow down our trip much more as we thought. Altogether so much more that in the jungle it was starting to get a bit dark actually. And there were many junctions where we could have gone in the wrong direction. I was really getting tired and needed longer rest periods. The trail became at some point very steep up & down, so we walked. It was now 18:00 and our girlfriends called us we but we told that we were almost there. My condition was going down fast now. I needed more water (luckily my friend had a big bottle water) and I was getting pain in my muscles in my legs. At no way of being near the end I decided that we needed help.

As I had been many times at the park I had seen sometimes local boys on big off-the-road-bikes. So I called my girlfriend to ask her to find these boys and ask them to start a Search & Rescue Mission for us. In the meanwhile my friend and I continued our struggle in the jungle. It was now almost dark and luckily my friend had lights on his bike, otherwise nobody would even find us here. My muscles were hurting; I was tired and needed water! It was dark in the jungle and we kept on going up-hill. As it now did become totally dark we stopped and waited to be found. And we waited.

Then suddenly I did hear the nicest noise of that day, the sound of a motorbike! But it was fading again soon. But then I saw a light in a distance and soon the first Search & Rescue motorbike was with us. And within 5-min a second was coming from the other side, and a third one. On one of the bikes was a passenger, a young boy. We changed places and he would drive my bike back while I was on the back of the motorbike. My friend was still thinking of doing the all trail himself and started to ride again. But as it was dark and the trail not easy to follow he quickly made a wrong turn-off and also he was being seated on the back of a motorbike. So there we were on the back of big off-the-road bikes rushing trough the jungle. So quick that my driver even lost control and I had to jump off the bike. We went all the way up the mountain from where you have a really magnificent view over the valley of Pattaya & Jomtien. Unfortunately we did not have much time to enjoy the view. We drove on and that’s where even the local boys made a mistake and we had to make a u-turn to correct our route back to where we started. Finally at about 19:45 we arrived back at our girlfriends who were very worried waiting at our car.

We offered the boys some money for their Search & Rescue Mission. They refused at first but my girlfriend said “It’s for your oil and time”. The team leader of them told us to go say thank you to his boss, the boss of the park, who was having a party with his friends in the park. He greeted us and invited us to join the meeting with his friends and to join the dinner with BBQ chicken, fish and of course beer and Seang Som. We explained our trip and he told us “You are lucky I was here, otherwise the Search & Rescue Mission would have started much later and you could have been found at midnight”. In the meanwhile the team-leader came back with more food and drink for us and he even wanted to give back the change of money. Which we of course refused and after some other small talk we jumped in our car to drive back home. A hot shower, more water and sleep was what I needed!