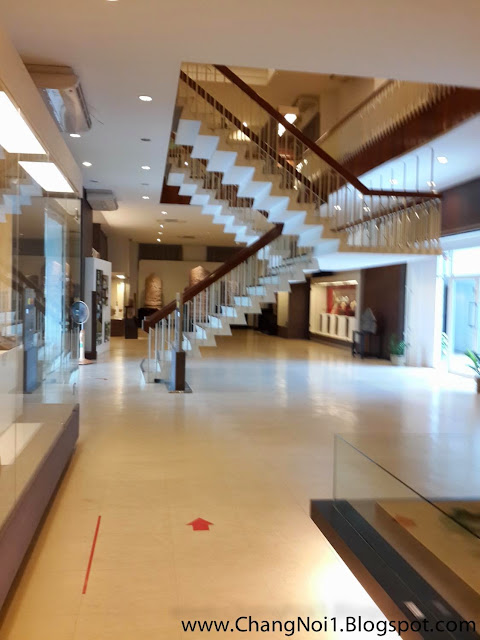 Although it is called "Khon Kaen National Museum" a name like "National Museum of North-East Thailand" would be more suitable. It is located in the city of Khon Kaen at the area of the Government buildings. Although the museum opened in 1972 (rebuild in 1993) it is in a modern and well taken care museum with explanation also in English.  The museum is open from Wednesday to Sunday from 09:00 to 16:00. It is closed on Monday, Tuesday and public holidays. Entrance fee is 20 Thai baht for Thai people but Tourists / Foreigners have the privilege to pay 5 times as much (100 Thai baht). Unfortunately I was not allowed to make photos inside (but I managed one shot).

In short you could say that the museum is an exhibition of North-East Thailand following the Prehistorical period (Settlement & Tools), the Historical period (Dvaravati Culture & Khmer Culture), Art Evolution and the City of Khon Kaen (Traces of the past, History & Folk Culture). To begin with I not have a high admiration for museums in Thailand, most times it is Thai language only, old and not taken care of. But this museum is a very good exception of that. Actually it is full of beautiful masterpieces of ancient art & images. Highly recommended!

On show are some maps with the places of importance for  Historical & Prehistorical Period. And it is amazingly to see that almost the all North-East of Thailand is littered with places of interest with archaeologically sites and Khmer ruins. Must be said that the majority are in the lower part of the Isaan. This museum is very well worth to visit when you are in Khon Kaen and makes a good starting point to explorer Prehistorical & Historical Isaan.