The north of Laos, a country without a hurry 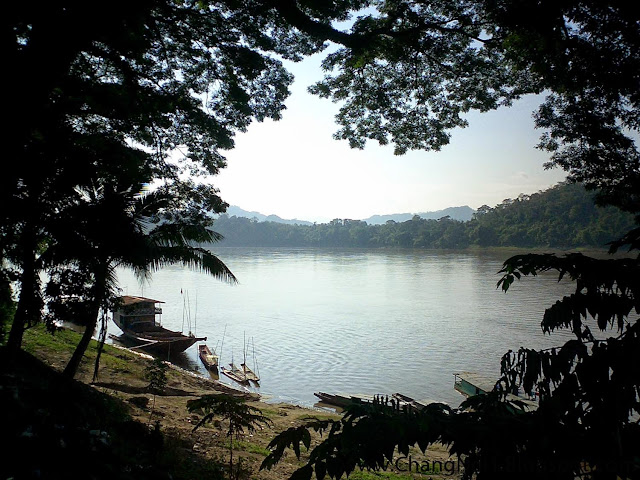 In 2004 I was traveling in Laos. For me it was more as 7 years ago that I was for the last time in the country of the thousand elephants. After 1 week in the south of Laos we left Don Khong with our big open pickup truck to Pakse to take there the VIP night bus to Vientiane. This bus leaves at 20:30 and arrives in Vientiane about 6 o’clock in the morning. The roads again were very good and they did stop one time to eat something or to use the toilet. It all seems like a very good way of transport but …. It’s an air-conditioned bus and it’s very, and I really mean very, good air-conditioned. So good that it was actually bloody cold! Even with the blanket that the sweet hostess will give you.

From the bus station in Vientiane we took the so called “Jumbo” taxis (a kind of tuk-tuk) to our hotel. Our hotel, The B&P hotel, is a renovated old colonial building within walking distance of the boulevard along the Mekong River. Finally here I could receive AIS GSM from Thailand, as you can see the transmitter towers at other side of the Mekong River, and I made a call back home to my girlfriend. In the past 7 years Vientiane seems to been changed from a dirty provincial city into a heaven for upscale backpackers. Along the boulevard are now many nice restaurants and bars and the area around the famous fountain has been renovated into a very cozy place with some restaurants. While the all group spread around to all the highlights of Vientiane, I went to my favorite temple, the Wat Si Saket. It’s the oldest temple in Vientiane that survived the wars with Thailand. I can sit here for hours and watch the hundreds of Buddha images that are collected here. Time seems to have past here.

Vientiane was only a stop-over to fly to Phonsawan (The plain of jars) and the next day we took a taxi to the airport of Vientiane. The airport is only 10 min from the center of town and consists of two building. The domestic terminal is what the only terminal at the airport was once. It’s an old building with Russian “design”. Next to this small old building is the brand new huge international airport. As it was lunch time I first looked for a restaurant in the domestic terminal but eating in an empty bunker was not my cup of tea. So I checked out the international terminal and at the first floor there is a very good restaurant where you can eat a really great international buffet with western and Asian food for “only” 49.000kip.

Flying in Laos is still a gamble and our flight was 45 min delayed so we left 1 hour too late. We did fly with an ATR-72 in a smooth flight of 45 min to Phonsawan. The airport there is nothing more as a strip of concrete between the many jars that are found on the “Plain of Jars”. From the airport it’s a 20 min ride to the new and ugly city of Phonsawan. Why new? Well simply because the old city of Phonsawan has been totally destroyed during the war. And wisely the Lao will not tell who did the bombing. Late in the afternoon we did arrive at our even uglier Lao-Chinese hotel. It’s winter time and we are high in the mountains so it’s cold here not only for us but also for the locals. And worse our hotel does not have a hot shower! The only good thing is that there are a few nice restaurants, like the Indian restaurant across the hotel.

The next day we would of course make an excursion to the “Plain of Jars”. Actually there are many sites where you can see the jars. But as this area has been a battle zone there are still many unexploded ordinance and even landmines. I still wonder why the one who made all that shit is not being held responsible for it. Well for that reason there are at this moment only 3 sites that you can visit safely. We did choose to visit only one site “Number 1”. Here are seen the biggest jars and a cave of which one thinks that it is used to make the jars. As actually nobody really knows why this jars are made and where they come from, we in our fantasia started to make all kind of theories.

Like it could have been beer-jars for giant people. But for me it seems more likely that they have been urns to buried people in. After visiting site “Number 1” we continued to the old city of Phonsawan which is now actually only a market and a few houses. Here we did visit one of the oldest Chedi’s of Laos that survived all the wars and the only temple that remained in the old city. On our way back we again passed the beautiful valley of the old city where you see many people working on the rice fields or in the stone ovens. And we did stop at a lovely Hmong village where you can see how the local people used old war material (bombs) to build houses or fences.
.
The next day our journey trough the mountains to Luang Prabang continued. It would have been a beautiful trip if it would not have been raining. We passed many small villages and most of the roads were very good. This area is known to be an unsafe route so along the way are seen armed guards to check the safety of the passing travelers. For me this with AK-47’s armed guards looked more like the bandits or rebels that are known for the unsafely of this area, but we arrived save in Luang Prabang. Our hotel, Ban Malo, is an old colonial villa just outside the main streets of the town. Coming back after in Luang Prabang after 7 years was a kind of shock for me. When I was there it was a sleepy town where the first tourists arrived and the first hotels were opened. Now it seems to be a popular place for the upscale backpackers and every house with more as 3 rooms seems to have been turned into a guesthouse. What was once the street where the hill-tribes sold their goods is now a kind of main street with coffee bars and restaurants. And in the evening it is turned into a kind of night-bazaar like in Chiang Mai, selling almost the same things. It’s a place full of tourists, but also very nice as a rest point in a long journey. Good food and a nice and warm atmosphere. From here the most people make boat trips over the Mekong River to the famous Pak Ou cave and the villages where they make Lao Lao or silk weaving.

From Luang Prabang our journey continued to Luang Nam Tha, a place on a high plateau in the mountains. Here the roads are beginning to be less good and it becomes a long journey for the old bus. In Luang Nam Tha we are staying in a guesthouse outside the city, between the beautiful rice fields and small villages. The next day the all group, except me of course, are going to make a two days trekking in the jungle area.

From here our almost last journey begins to Muang Sing, which is about 15 km from the Chinese border. Here again the roads are getting even almost bad and the only 200 km takes us about 4 to 5 hours driving. We also passing the famous inter regional highway that is to be build from China to Thailand via Laos. And the strange thing is that this road is being built by Thai and Chinese, not by Lao people. All along the way you see Chinese written signs and Chinese trucks.

The next day the last part of our journey in Laos begins when early in the morning the old bus picks us up at the hotel to bring us to Xiang Kok where we will take the speedboat over the Mekong River to Huay Sai. The trip from Muang Sing to Xiang Kok is only 50 km but it takes us more as 2 hours as the roads here are actually no roads. We are passing many Hmong and Aka villages that are totally disconnected from the modern world. After breakfast we get into our speedboats, 4 people in one boat with our luggage. As it has not been raining for a long time the water level of the Mekong River is low, but our speedboats are still very fast. It’s a beautiful, but also exciting trip when we are passing gores and some big ships from China. On the left side we are passing the mountainous banks of the Mekong River in Laos and on our right side is Burma. After about 2-hours we are reaching the central point of the (in) famous Golden Triangle where we are passing Thailand on our right side. After again one more hour we arrive at Huay Sai, the Lao side of the border place to Thailand. Here we spend our last Lao money and take the ferry to Thailand. For me it was home sweet home! I think I have never felt so happy to be back in Thailand again. From the Thai border town, Chiang Khong, it’s about 2-hours drive to Chiang Rai where we would stay one more night before our final flight back to Bangkok.

Chiang Rai is a small provincial town, which is becoming bigger. It’s still a small town and for that reason more and more tourists prefer Chiang Rai instead of Chiang Mai. We did stay in the beautiful “Golden Triangle Inn hotel”, which is in walking distance of the main street of town. In the evening there is behind the bus terminal a nice bazaar where originally the local hill-tribes have been selling their goods. Nowadays of course it’s more a market for tourists. At the other side is a street with some restaurants, bars and some almost gone bars for the nightlife.
LABELS : Laos MekongRiver Stories Traveling